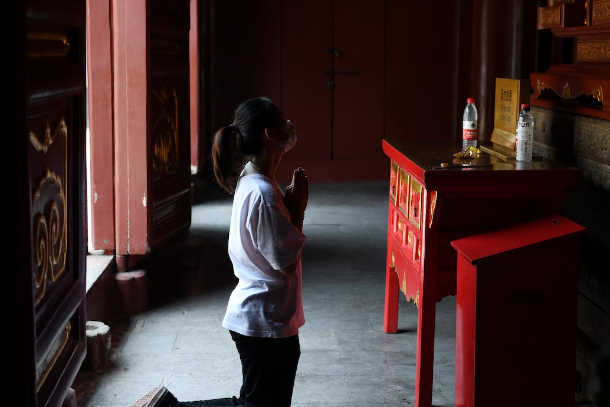 A woman wearing a mask prays at the Lama Temple in Beijing after it reopened on June 10. The temple was shut down on Jan. 24 as authorities closed tourist attractions and other sites to contain the coronavirus. (Photo: Greg Baker/AFP)

The communist government in China has intensified its mass detention of people as part of its accelerated sinicization that clamps down on freedom of religion, says the US State Department's annual report.

The government led by the Chinese Communist Party (CCP) has "significantly intensified its campaign of mass detention" of members of minority groups, said the International Religious Freedom Report of 2019. The government continued a campaign of religious sinicization to bring all religious doctrine and practice in line with CCP doctrine, adopting a formal five-year plan on Jan. 7, stated the report released on June 10.

Since April 2017, the government has arbitrarily detained more than one million Uyghurs, ethnic Kazakhs, Hui and other Muslim groups, including Uyghur Christians, in specially built or converted internment camps in Xinjiang. There they are subjected to "forced disappearance, political indoctrination, torture, physical and psychological abuse, including forced sterilization and sexual abuse, forced labor and prolonged detention without trial because of their religion and ethnicity," the report said. The Chinese government recognizes only five official religions — Buddhism, Taoism, Islam, Protestantism and Catholicism — but they can practice faith only if they become part of the five state-sanctioned "patriotic religious associations." For example, the report said, officials have detained Bishop Peter Shao Zhumin, leader of the underground Catholic Church in Wenzhou, Zhejiang province, five times since 2016. Bishop Shao refused to register with the official Church and join the Chinese Catholic Patriotic Association. He was sent for "re-education" during some of his detentions. In December, Pastor Wang Yi was tried in secret and sentenced to nine years in prison by a court in Chengdu, Sichuan province, in connection with his peaceful advocacy for religious freedom, the report said. As part of a nationwide crackdown, authorities in Shandong province arrested more than 6,000 members of the Church of Almighty God during 2019. The Christian group established in 1991 is considered an "evil cult" by the government. The authorities forced high-level political prisoners to undergo extralegal detention. They included Catholic Auxiliary Bishop of Shanghai Thaddeus Ma Daqin, writer Yang Maodong (pen name Guo Feixiong), Uyghur scholars Ilham Tohti and Rahile Dawut, activist Wang Bingzhang, activist Liu Xianbin and Pastor Zhang Shaojie. Falun Gong practitioners Bian Lichao and Ma Zhenyu were also jailed. According to the report, authorities increasingly relied on cameras and other forms of surveillance to monitor and intimidate political dissidents and religious. These included facial recognition and "gait recognition" video surveillance, allowing identification of individuals in crowds quickly. The government increasingly silenced activists and religious leaders by denying them permission to travel, both internationally and domestically, or keeping them under unofficial house arrest. Religious congregations and assemblies are targeted as they reportedly pose a threat to "party leadership" or infringe upon the "interests of the state," it said. Officials across the country shut down religious venues, including some that were affiliated with the authorized patriotic religious associations. They placed surveillance cameras in houses of worship as a condition of allowing these venues to continue operating. At the academic level, undergraduate students must complete political ideology coursework on subjects such as Marxism, Maoism and Deng Xiaoping thought, the report said. An individual's "social credit score," among other things, quantifies a person's loyalty to the government. The score is based on the "loyalty" of sites visited, as well as the "loyalty" of other netizens with whom a person interacted, the reporte said. In 2019, state media reported that authorities asked the media "to engage in "journalism based on Marxism." The rules issued in the year are also planned for greater political and ideological indoctrination efforts. Chinese authorities shuttered 3,673 websites and 1.2 million social media accounts in just the second and third quarters of the year 2019, the report pointed out. The US State Department report follows the signing of an executive order on June 2 by President Donald Trump prioritizing religious freedom worldwide. Since 1999, the US has designated China as a country of particular concern under the International Religious Freedom Act of 1998 for violating religious freedom. The State Department wants the US to maintain restrictions on exports of crime control and detection instruments and equipment to China.