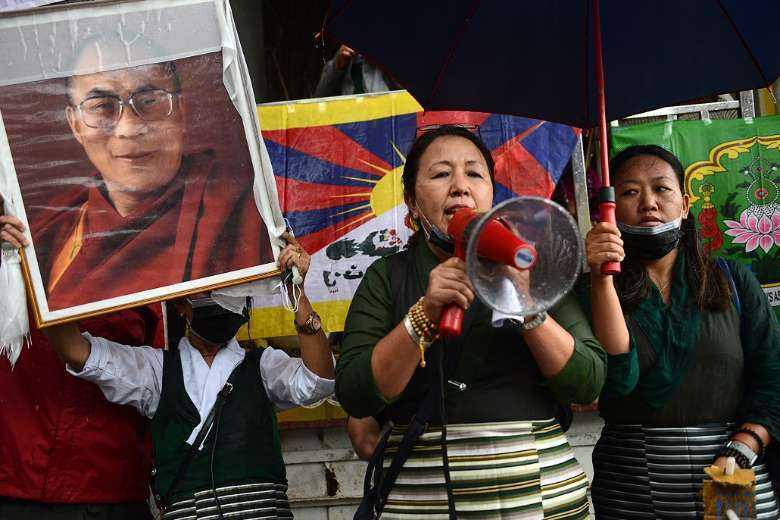 Tenzin Dolma, president of the Tibetan Women's Association, speaks during a candlelight vigil to protest against the 100th anniversary of the founding of the Communist Party of China in McLeod Ganj on July 1. (Photo: AFP)

Chinese authorities in the Tibet Autonomous Region (TAR) have prosecuted four monks who received up to 20 years in prison for dubious offenses, Human Rights Watch (HRW) said in a new report.

In the 61-page report, "Prosecute Them with Awesome Power: China’s Crackdown on Tengdro Monastery and Restrictions on Communications in Tibet," released on July 6, HRW provided the first detailed account of the raid on Tengdro monastery and its consequences, including multiple detentions and a suicide.

In September 2019, police in Lhasa, the Tibetan capital, found private messages on a cellphone lost by Choegyal Wangpo, a Tibetan monk. Several messages had been exchanged with Tibetan monks living in Nepal, including records of donations after the 2015 Nepal earthquake.

The police responded with a raid on the monastery that resulted in multiple arrests, a suicide and in 2020 a secret trial of four monks, according to the report.

HRW said the sentences reflect the increasing pressure on local officials to restrict online communications and punish peaceful expression as a security threat.

The report drew on interviews with Tibetans outside China, official media, social media and exile media reports to examine the circumstances that led to the raid and the factors that could explain the extreme punishment meted out to the Tengdro monks.

It reported on the detention of two Tibetans for sending remittances to relatives in India in October 2020, shortly after the sentencing of the Tengdro monks. One of the Tibetans died from injuries inflicted in custody.

Since then, there have been several reports in Tibetan media outside China of meetings held by local officials both in the TAR and other Tibetan areas to threaten residents against contacting relatives outside China.

The authorities have also detained and beaten Tibetan netizens for posts deemed by the authorities to endanger national security. The Tengdro monks’ case demonstrates the arbitrary and extreme manner in which restrictions on online communications are being enforced throughout Tibetan areas.

HRW has called for the immediate release of the imprisoned monks and urged concerned governments and the United Nations to pressure Beijing to respect Tibetans’ human rights.

It said these recommendations echo the June 2020 call by 50 UN human rights experts to establish a standing monitoring mechanism on China at the UN.

“The unprecedented sentences of the Tengdro monks reflect a perfect storm in Tibet. The Chinese government’s assumption that Tibetan monks and nuns are potential subversives, the heightened border security and increased restrictions on online communications and religious donations all combined to create a shocking miscarriage of justice,” said Sophie Richardson, China director at HRW.

Tibet, a formerly independent nation, was taken over and incorporated into China by force after a failed uprising nearly 70 years ago. The Dalai Lama and thousands of his followers fled into exile in India. Beijing has maintained a tight grip on Tibet and Tibetan-populated regions of western Chinese provinces.