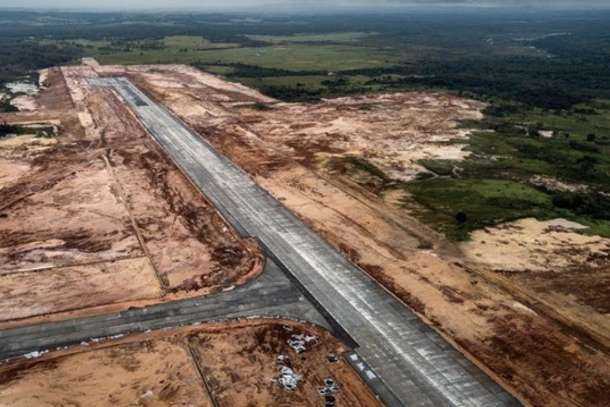 The project at Dara Sakor on the southwest coast of Cambodia has a huge runway. (Photo: YouTube)

The Chinese government has condemned US sanctions imposed on a state-owned company for human rights abuses in Cambodia, saying they undermined “the legitimate interests of enterprises” and adding “this is an act of repression.”

On Sept. 15, the US stepped up diplomatic pressure on Beijing and sanctioned Union Development Group (UDG) over the seizure of land in a US$3.8 billion property development at Dara Sakor on the southwest coast of Cambodia.

A statement from the US Treasury said UDG had been blocked and financial transactions, the provision of goods and services prohibited within the US.

It was the first time a Chinese company had been sanctioned for human rights in Cambodia, where China has invested billions of dollars and emerged as this tiny country’s main benefactor.

“This project complies with the laws and regulations of Cambodia and contributes to the socioeconomic development of Cambodia,” said a spokesperson, who declined to be named, from the Chinese embassy in Phnom Penh.

“This is an act of repression. The US crackdown on legal investment by Chinese enterprises in Cambodia not only undermines the legitimate interests of enterprises but is also a complete violation of Cambodia's sovereignty,” an embassy statement, published by Fresh News, added.

UDG acquired a 99-year lease on 36,000 hectares in 2008 at Dara Sakor in Koh Kong province and has since built what the US Treasury says is “ostensibly” a tourism development, with a 3.4-kilometer runway.

However, analysts have cast doubts over the project by suggesting it could be used for military purposes, a claim rejected by Cambodian Prime Minister Hun Sen.

The US Treasury also said UDG prevented villagers from planting rice, noting the state-owned company was accused of burning down the houses of villagers and had used private security and the Cambodian military to seize land.

It also said the United Nations Office of the High Commissioner for Human Rights had asked UDG to stop using military force while Cambodia’s Council of Ministers issued a directive ordering the company to halt the destruction of village property.

But UDG “ignored the directive and continued the destruction,” a Treasury statement said.

Cambodian general Kun Kim was cited for using the military to intimidate villagers and to clear land for UDG ahead of construction at Dara Sakor. A former joint chief of staff of the Royal Cambodian Armed Forces, Kun Kim was sanctioned by the US Treasury in December.

UDG was sanctioned under the Global Magnitsky Human Rights Act and relevant US government regulations, which target perpetrators of serious human rights abuse and corruption.

“The Chinese embassy in Cambodia strongly opposes and condemns such act and urges the United States to immediately correct this wrong approach and lift its sanctions,” the embassy spokesman said.