Taiwan lives under constant threat of invasion by China, which sees the self-ruled island as part of its territory 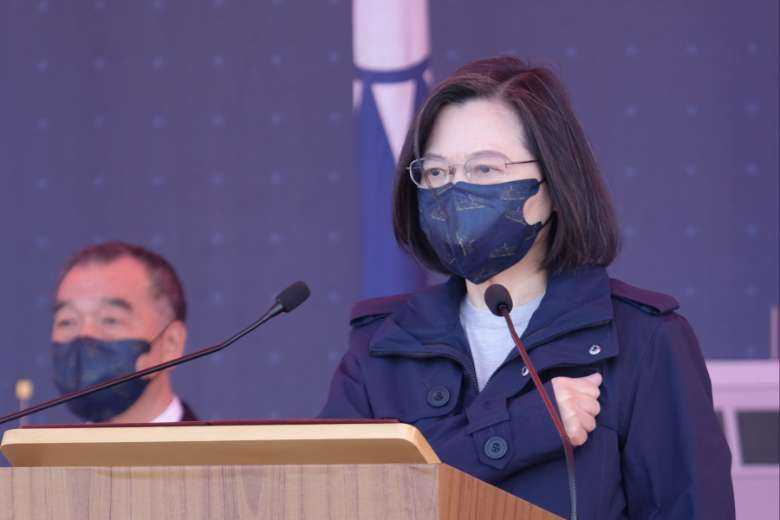 Taiwan President Tsai Ing-wen salutes as Defense Minister Chou Kuo-cheng looks on during an inauguration ceremony for mine-laying ships at a navy base in Kaohsiung, southern Taiwan, on Jan. 14. (Photo: AFP)

Taiwan lives under the constant threat of invasion by China, which sees the self-ruled, democratic island as part of its territory to eventually be reclaimed, by force if necessary.

The final quarter of 2021 saw a massive spike of incursions from China into Taiwan's air defence identification zone (ADIZ), with the biggest single day coming on Oct. 4, when 56 Chinese warplanes entered the zone.

The island's Defence Ministry said it saw 39 warplanes from China enter Taiwan's ADIZ — the second-largest number of incursions on record, which is shared with October 2 last year.

It added that it scrambled its own aircraft to broadcast warnings and deployed air defence missile systems to track the jets that entered its zone.

It remains unclear why China launched such a large single-day mission. But the incursions come on the heels of the United States and Japan carrying out naval exercises in the Philippine Sea, an area that includes waters just east of Taiwan.

Taiwan only started regularly publicising its data on air incursions in September 2020.

October remains the busiest month on record, with 196 incursions, 149 of which were made over just four days as Beijing marked its annual National Day.

The defence zone is not the same as Taiwan's territorial airspace but includes a far greater area that overlaps with part of China's own ADIZ.

Beijing has ramped up pressure on Taiwan since Tsai Ing-wen was elected president in 2016 as she considers the island a sovereign nation and not part of "one China".

Last year Taiwan recorded 969 incursions by Chinese warplanes into its ADIZ, according to a database compiled by AFP -- more than double the roughly 380 carried out in 2020.

Taiwan's air force has suffered a string of fatal accidents in recent years as its ageing fleet is kept under constant pressure by China.

The air force temporarily grounded all F-16 fighters earlier this month after one of its most advanced F-16V jets crashed into the sea during a routine training mission, killing one pilot.