Zhang Kai announces he is free via social media 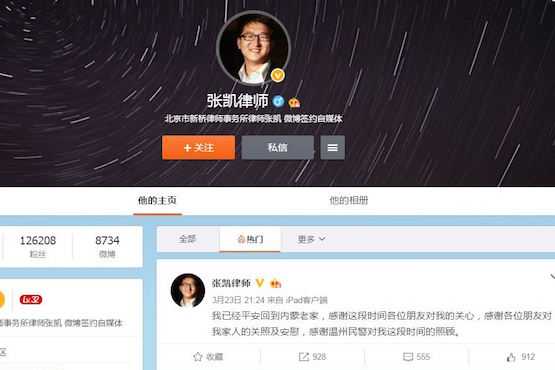 Lawyer Zhang Kai announces via his Sina Weibo account his release from detention and that he is at home. (Photo by ucannews.com)

A Christian lawyer who fought for church rights against an ongoing cross-removal campaign in China's eastern Zhejiang province has been released, a month after he made a TV confession.

Zhang Kai posted "I have returned safely to my home in Inner Mongolia" via his Sina Weibo account, the Chinese equivalent of Twitter on March 24.

He thanked his friends as well as the police of Wenzhou for taking care of him. Wenzhou, dubbed Jerusalem of the East, is the most seriously affected area in the cross-removal campaign.

The human rights lawyer had been detained since August. He made a confession on a Wenzhou TV station on Feb. 25, admitting that he disturbed social order, endangered state security and received funding from foreign organizations. However, activists believe the confession was made under duress.

His message about his release spread virally on social media. Social media user Emma An Jing said, "Thanks for the Grace of God" on hearing the news while a number of other bloggers said "Blessed are those who suffered for justice."

Zhang's mother also confirmed the news via Sina Weibo and gave thanks to God "for leading us through more than 200 days."

Bob Fu, president of the Washington D.C.-based China Aid Society, said Zhang's release is "a true victory as a result of coordinated international pressure from the U.S., the European Union as well as other countries such as the U.K. and the Netherlands." His organization launched a campaign to free the lawyer earlier this month.

Fu, one of the two people named in Zhang's confession, praised the lawyer as "a bold human rights defender of the rule of law and religious freedom."

Though pleased to hear the news, both Fu and Mervyn Thomas, chief executive of Christian Solidarity Worldwide, cautioned that the conditions of his release are so far unknown.

Thomas also expressed concern that several of Zhang's fellow lawyers, as well as a number of Zhejiang pastors, remain in detention.

"We urge the Chinese government to protect the rights and safety of those who defend freedom of religion of belief and other human rights in China," Thomas said in a statement.

Despite Zhang's release, the cross-removal campaign remains ongoing. Since January, more than 50 crosses have been removed in Zhejiang, where there are an estimated 2 million Protestants and 200,000 Catholics.