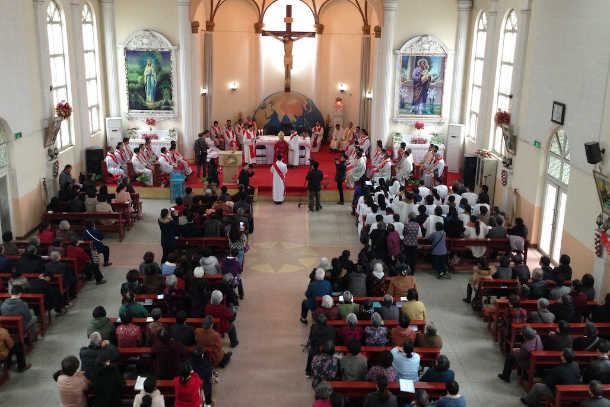 Our Lady of Lourdes Church of Zhengzhou Diocese in China's Henan province. Moves to suppress religion in Henan have intensified this year. (ucanews.com photo)

A priest in China's Henan province claims to have received a notice from municipal authorities requesting churches in the province gather statistics on the backgrounds of their congregations, especially those from poor families.

But he is refusing to cooperate out of fear that anyone named in the register could be barred from receiving state subsidies as punishment for practicing their faith.

"This is totally unreasonable. I suspect their hidden agenda may be to cancel people’s low-income subsidies," said the man, who declined to give his name for fear of reprisals from the state.

China has forged an uneasy truce with the Vatican in recent years despite the Communist country being officially atheist. Pew Institute figures suggest it now has a population of 10 million Catholics with 10 percent concentrated in Henan, considered the cradle of Chinese civilization.

"Now we just have to wait for the inspection team to come and see what they say before we determine our next move," added the clergyman, an open-church priest who serves in Luoyang Diocese of Sanmenxia City.

He expressed concern about what the government was planning to do with this data, part of a newly launched "special project."

While the government claims the notice is aimed at improving the way churches and other venues are managed, the priest said it was likely a pretext for restricting and suppressing religious activity in the province.

He told ucanews.com that local officials visited his church on July 1 and handed him a circular titled "Special Office Emergency Notice", ordering clergy to follow the instructions laid out therein.

The notice contained five points including one mandating that the number and backgrounds of worshippers of all faiths be documented and reported to authorities by 6pm on July 4.

Religious leaders were also told to inform local officials of any minors who enter religious venues, and of any cases where neon lights or speakers have been installed in places of worship.

Lists of clergy must also be hung up at parishes so that officials can confirm they have the necessary permits to preach from the pulpit, the notice said.

A third point says the Chinese flag must be on permanent display at religious venues and the national anthem sung at each service, the priest said.

The other two points relate to keeping prelates updated on newly revised regulations pertaining to religious affairs, and providing statistics to improve town and village archives, the open-church priest said.

Personnel from the special project office will make unannounced visits to churches in the province as and when they deem fit to ensure they are complying with the new rules, the notice warned. Investigations will be carried out to ensure all districts are cooperating, it stated.

The priest said religious venues were being heavily scrutinized and those without permits shuttered. Even those with the right credentials have been warned that they will be punished if they admit minors or Party members, he said.

Another priest in the province’s Anyang Diocese said he had received the same notice.

Efforts to suppress religion in Henan have intensified this year. Since Chinese New Year in mid-February, reports have emerged about a ban on the posting of Catholic couplets and the seizure of churches and church-run kindergartens.

A source told ucanews.com that the official told the church that the closure was the policy of the Communist Party. The parish priest in charge of the seized church was registered with the government but the church was not.

The source said the government will not allow the church to register or to open and that authorities would probably not confiscate the church but clergy would not be able to return for some time.

The source condemned "such brutal enforcement" and said the local government had blatantly trampled on and undermined the state's policies on religion.

After China's revised regulations on religious affairs were enforced on Feb. 1, minors have been banned from entering places of worship. Since then, police cars have been stationed outside churches every Sunday.

In Anyang Diocese, notices were posted and officials stationed outside churches to block minors from entering on Sundays.

On April 8, Henan Catholic Patriotic Association and Henan Catholic Administration Commission jointly issued a circular stating that no venue for religious activities should hold training sessions and no children should be brought to church by parents.

"It was only propaganda and education previously, but now there is a red line, a high pressure line, and take it seriously," the circular said, warning that venues could be closed if the rules were broken.

Henan authorities have also driven underground priests from their dioceses, forcibly demolished the tombstone of Bishop Li Hongye, who was appointed by the Vatican but not recognized by the government's Chinese Catholic Patriotic Association, and confiscated the property of both open and underground church communities.