Chinese authorities have asked Christians from state-approved Protestant churches to pray for communist soldiers who died in the war with imperial Japan.

While Chinese Christians are banned from honoring their own martyrs and praying to them, a new directive from the authorities says it is mandatory to pray for soldiers of the Red Army who died during the resistance war against Japanese occupation forces, Bitter Winter, a magazine on human rights and religious liberty, reported on Sept. 6.

The directive has been sent to all churches that are part of Three-Self Patriotic Movement, the state-controlled body of Protestant churches which enjoys legal recognition from the Chinese Communist Party.

Last week members of the Theological Seminary in Fujian were invited to attend a celebration to pay tribute to martyrs of what China calls the “People’s War of Resistance Against the Japanese Aggression.”

Prayers were held seeking the intercession of “Jesus, the King of Peace” for the “peaceful reunification” of China, Bitter Winter reported.

The comment on reunification was in reference to Taiwan, formerly known as Formosa, which Beijing considers to be a breakaway province and has threatened to annex militarily. Taiwan is an independent and democratic country but has never officially declared independence. It maintains diplomatic ties with 14 countries and the Vatican, with the US as one of its main allies.

For decades, authorities have strictly controlled official religious groups and persecuted those adhering allegiance to unrecognized or unregistered groups

Chinese authorities sent the following directive on prayers for martyrs to all Christian churches in each province, autonomous region or municipality directly under the central government:

“Local churches and congregations may, according to the actual local situation, carry out relevant peace prayer activities in a small and decentralized form, in line with the local requirements for prevention and control of the new Covid epidemic, to further promote the fine tradition of patriotism and love of religion and to demonstrate the good image of peace-loving Christianity in China.”

Local churches have been asked to submit evidence of the relevant activities (text, video and photo materials) to the media ministry department of the China Christian Council by September 10. 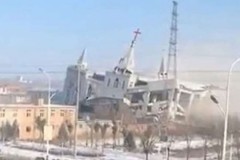 Japan’s occupation forces surrendered in China in September 1945 after a bloody war with resistance forces that joined with nationalists, communists and international powers to fight Japan during World War II.

The nationalists, who played a major role in the resistance, were later defeated and driven away by the communists, who came to power in 1949 after the Chinese Civil War. Since then, China has been eulogizing the soldiers of the communist Red Army while largely minimizing the role of the nationalists.