Unclear whether these were scheduled removals or new round of persecution, Christian officials say 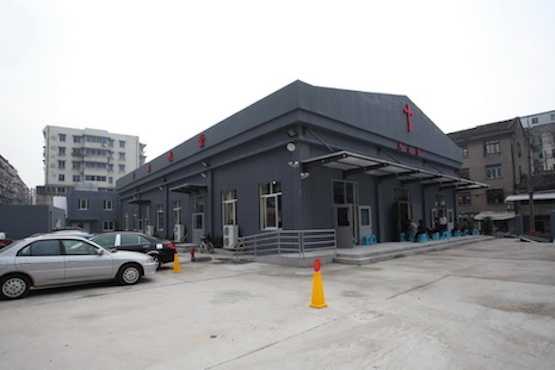 A temporary church in Wenzhou Diocese, consecrated on Oct. 27, features a cross that conforms to new provincial regulations mandating the size and placement of crosses. (ucanews.com photo)

Zhejiang province has again started removing church crosses with authorities taking down 18 so far this year.

At least 13 crosses were removed over the past week as Zhang Kai, a Christian lawyer who helped churches rebuff the campaign, dismissed his colleague in secret detention, apparently under pressure from security officials.

Christians in Zhejiang said it remained unclear whether the new removals "were just crosses that were not removed as scheduled last year or if this is a new round of persecution."

After removing more than 1,500 crosses from Protestant and Catholic churches in Zhejiang since the end of 2013, the campaign appeared to slow by September.

Authorities then began a "five entries and transformations" campaign in an attempt to control content inside churches, including by sending state officials to try to stop people from talking about the cross-removal campaign during Mass.

Among the most critical church leaders was Joseph Gu, chief pastor at the Chongyi Church in Hangzhou, the biggest church in Zhejiang province. After speaking out against the campaign in July, he was officially dismissed in mid-January and is reportedly in a "black jail," a secret holding facility, reported U.S.-based China Aid.

Pastor Gu is now under investigation for embezzlement, the state-backed Christian Council of Zhejiang announced in a Jan. 29 statement.

"His arrest marks a major escalation in the crackdown against those who oppose the forced demolition of crosses," said China Aid president Bob Fu. "He will be the highest-ranking national church leader arrested since the Cultural Revolution."

Zhang Kai, the most prominent Christian lawyer helping churches defend their crosses from removal, also languishes in a black jail in Zhejiang province and has reportedly dismissed his lawyer.

A handwritten letter dated Jan. 27 was sent to Zhang's defense lawyer Zhang Chenshou in a marked envelope of the Municipal Public Security Bureau of Wenzhou, suggesting the note was signed by Zhang under duress.

Forced dismissal of lawyers and denying access to a defense is illegal in China but remains a common tactic by authorities, particularly in cases involving religious or ethnic minorities.

"Thank you for being my lawyer. Because I am now cooperating in the investigation, I don't need a lawyer for now. I will consider [you] when I need [your services]," the letter read.

Zhang was detained by authorities in late August as he prepared to give evidence on the cross-removal campaign to David Saperstein, the U.S. ambassador-at-large-for religious freedom.