Such theatrics are against the 'spirit' of rule of law, says newspaper 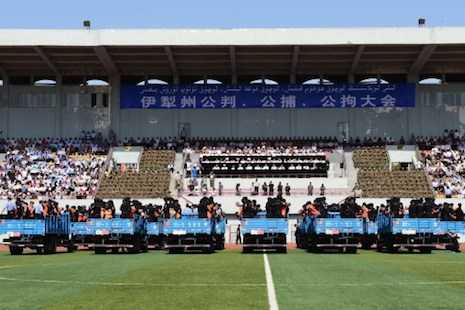 Chinese officials sentenced eight criminals and paraded another 16 suspects in front of 5,000 spectators, prompting criticism by domestic media Thursday, which drew parallels with the bloodthirsty chaos of the Cultural Revolution.

The public sentencing emerged as China's ruling Communist Party conclude a top-level meeting — known as the Fourth Plenum — which authorities previously said would focus on the "rule of law".

Legal officials in Huarong, in the central province of Hunan, attended the "hearing", where the 16 suspects were displayed wearing placards around their necks, the state-run Global Times said.

They were then paraded around the town on an open truck draped with banners reading "Firmly punish robbery and theft", according to pictures posted online by news portal Sina.com.

"The move has drawn severe criticism from the public as the public sentencing brought back painful memories of the Cultural Revolution (1966-76)," the Global Times said, referring to the Mao Zedong-inspired denunciations of ideological "foes".

"(It) was against the spirit of the rule of law as stressed by Chinese President Xi Jinping," the newspaper added.

China in May carried out a "mass gathering for public sentencing" in a packed stadium in the restive largely Muslim region of Xinjiang, and has held a series of rallies in the area which have seen suspects paraded in front of crowds.

The Fourth Plenum, which started Monday and concludes Thursday, brings together the party's 205-strong Central Committee and around 170 reserve members.

Also attending are officials from bodies including the Party's much-feared internal watchdog, the Central Commission for Discipline Inspection.

The Hunan public sentencing, which happened last Friday, came after a similar event last year for eight people who were guilty of drug offences, assault and theft, the Global Times reported.

"It is like a tradition," a local official told the newspaper.

"When I was young, there were open sentencing sessions like this with more than 10,000 people." AFP