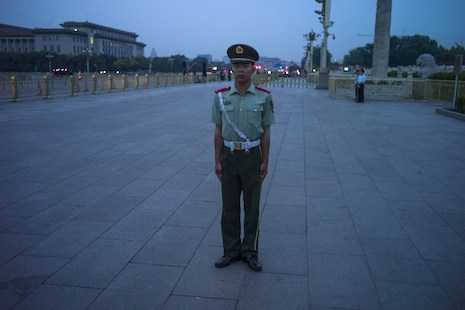 A paramilitary guard stands for the daily flag rising ceremony in Tiananmen Square in Beijing on Thursday on the 26th anniversary of the June 4, 1989 crackdown on pro-democracy protests (AFP Photo/Fred Dufour)

Twenty-six years ago today, Chinese tanks and soldiers surrounded a last, desperate group of mainly student activists in Beijing’s Tiananmen Square. It marked the end of a bloody crackdown, the strongest challenge ever faced by the Communist rulers of the world’s most populous nation.

Yet in Beijing and across China today there was all but no mention of what happened, not in newspapers nor on television, and hardly among ordinary Chinese except in whispers, in private.

Just how has the Communist Party been so successful at all but erasing this tumultuous event from the memories of more than 1.3 billion people?

In her recent book The People’s Republic of Amnesia: Tiananmen Revisited, Louisa Lim showed 100 Chinese students a picture of ‘tank man’, the iconic image that still defines the protests in the West. Only 15 of them recognized it.

Last week, an open letter written by 11 Chinese students studying in the West condemned the secrecy that has clouded China’s collective memory of Tiananmen, noting that only in leaving the country were they able to find out.

Their discussion of what happened mainly in Beijing but also in different cities across China in May and June 1989 is mostly addressed to fellow students back in China trapped behind what the letter terms the “ever higher Internet firewall”.

The state-run Global Times in its op-ed response last week titled ‘Hostile forces target younger generation’ was remarkable in that there was any response at all, thereby drawing attention to a letter that would otherwise have gone unnoticed.

This half-truth is at the heart of how the Communist Party has achieved its aim to all but consign Tiananmen 1989 not to history but to oblivion.

Any site that is not blocked in China is subject to its own self-censorship imposed by authorities, as well as teams of tens of thousands of state-employed censors who remove content from social media sites.

“Tiananmen-related words are always on the blocked list,” Charlie Smith, co-founder of China online censorship monitor GreatFire.org, told ucanews.com. “It’s not that as if on June 5 the authorities turn off censorship. It just stays in place and keeps getting added to each year.”

This week, Chinese users of WeChat, a popular smart phone-based social media app, noted they were unable to send money values of 6.4 yuan or 89.64 yuan, numbers that appear to have been blocked because they are Tiananmen date references.

In theory, it is true that Chinese can circumvent blocks on overseas content about Tiananmen by using a virtual private network that routes through servers overseas.

However, in practice, very few of China’s 600 million Internet users bother with VPNs because they dramatically slow down an already pedestrian Internet service and they cost money.

The VPN used to access the blocked information used in this article cost about US$100 for a year’s subscription. And many of them have stopped working as China has become better at shutting out VPNs with recent updates to the Great Firewall.

These tools stop the masses from finding out. Those who are persistent and want to start spreading or acting on information face an altogether more frightening challenge.

In a bid to track down people who might be engaged in subversive acts against the state, China has called on foreign tech companies to concede to ‘Chinese law’, a standard requirement for all domestic companies.

As a result, Google pulled out after refusing to censor and hand over information on its users to authorities. Since the 25th anniversary of Tiananmen a year ago, the world’s most popular search engine has been blocked on the mainland.

Few other tech giants have been as willing to forego the world’s biggest marketplace so easily.

In 2005, Skype agreed to a joint venture with little-known Chinese company TOM Online. Although this version of Skype looks exactly the same as any other version of the program, American researcher Jeffrey Knockel has shown that TOM’s servers automatically intercept text from a sensitive list of about 2,000 words when typed into Skype text. These include ‘Tiananmen’ and ‘June 4’.

In 2012, Chinese prosecutors cited a poem and text messages sent using Skype by a dissident who called on people to “use your feet and take to the square to make a choice”. Zhu Yufu remains behind bars.

Among the most compliant tech companies in China is LinkedIn, which has admitted actively removing content deemed too sensitive by authorities.

Overall, there is little doubt that Internet-based efforts to block Tiananmen content have been ramped up by authorities as more Chinese use the web, said Smith of GreatFire.org.

“Xi Jinping is hellbent on full control of the Internet and since June of last year has taken a really heavy-handed approach,” he said.

Since Xi became president in March 2013, China has required that all SIM cards be registered with the local security bureau. Phone-tapping is common and usually occurs when journalists, activists or anyone else deemed a threat to stability contacts a sensitive person.

China’s authorities are believed to operate more surveillance cameras than any other country in the world.

Last week, the Beijing News reported that the capital’s streets now have more than 30,000 surveillance cameras. Last month, six government departments including the National Development and Reform Commission announced vague plans to cover just about every public space in the country with CCTV by the year 2020.

China already has among the most sophisticated face-recognition software available and has reportedly conducted numerous real-life tests.

Those who have tried to overcome these formidable obstacles to keeping discussion of Tiananmen alive have generally faced increasingly severe punishments.

The Tiananmen Mothers, an advocacy group composed mainly of relatives of those killed during the 1989 protests, have faced restriction of movement, harassment and surveillance of their homes and mobile phones.

“In 2014, the 25th anniversary of June Fourth, we had originally decided to hold a memorial ceremony in one of our homes on May 16. However, from Tomb-sweeping Day in April to around June 10, the majority of the Tiananmen Mothers in Beijing were visited by officials from the Municipal Public Security Bureau, State Security Brigade, district police sub-stations, and neighborhood committees to ‘have a talk’. Watch stations were set up outside their homes. And they were followed and watched when they went out. Therefore, the scheduled ceremony had to be abandoned,” the group said in an open letter to the Chinese government issued on Monday.

This year, authorities have reportedly detained or forced “vacations” on dozens of activists so that they are silenced, tactics that have worked only too well for years, said William Nee, a Hong Kong-based China researcher for Amnesty International.

“To a large extent, the way Xi Jinping is handling the memory of the Tiananmen crackdown varies little with his predecessors,” he told ucanews.com. “Given that the default behavior has been to deny the truth for 26 years, it will take an act of courage and leadership to do the right thing and confront history honestly.”