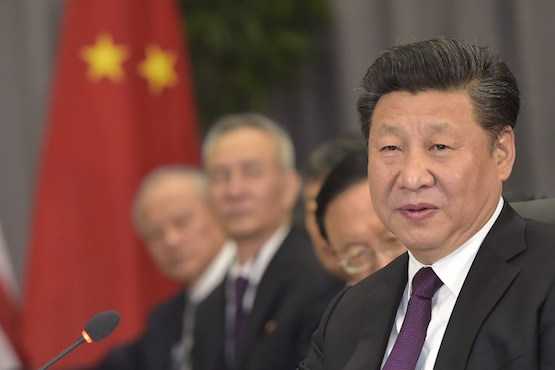 President Xi Jinping calls to Sinicize religion has been questioned by China watchers about what this will actually mean for the millions of religious believers in the communist-run country. (Photo by AFP)

By ucanews.com reporters in Hong Kong and China

China's Communist Party has officially committed to make foreign Western religions more Chinese, or "Sinicized," during the first top-level meeting on religious matters in 15 years that highlighted escalating concerns at the surging popularity of religion in the country.

The meeting keenly focused on Christianity, the foundation religion of the West, which some observers estimate has as many as 100 million followers in the country.

Originally scheduled in December, the meeting was to finalize a yet unreleased blueprint to more tightly manage the country's believers.

The outcome appears aimed squarely at Christianity and raised the spectre of foreigners inflitrating China via religious groups.

All but one of China's elite Politburo Standing Committee, including President Xi Jinping and his Prime Minister Li Keqiang, attended the two-day summit held behind closed doors in Beijing where rolling meetings between committee members and top religious officials were held.

Comments by Xi at the meeting drove home the key point that atheist China would separate religion and politics and the influence of "external forces" and "extremist ideas" — references to the Vatican which is viewed by Beijing as a rival center of power influencing China's more than 12 million Catholics — as well as Muslim extremists.

Observers said the party's plans to Sinicize religion left many questions as to what measures would be instituted, typical of the bare bone information that initially emerges from China's high level meetings in efforts to highlight a discrete set of key points to be driven home to citizens by propaganda chiefs.

"What constitutes Sinicization is not yet clear to those outside [of the Chinese government]," said Anthony Lam Suik-ki, senior research fellow at the Hong Kong Diocese's Holy Spirit Study Center.

The meeting itself also showed Xi has grown increasingly disillusioned with the work of key organs of the Chinese state that manage religions including the State Administration for Religious Affairs, added Lam.

Xi originally introduced the concept of making religions more Chinese in May 2016 at the Central Committee Conference of the United Front Work Department — the main party body that supervises religions — causing concern among Christian churches that Beijing intended to exert greater ideological control.

"The stress on 'guidance' means the party acknowledged religion is a complicated issue and hopes to have better control of it," said Ying Fuk-tsang, director of the Divinity School at the Chinese University in Hong Kong.

Churches in Zhejiang, one of the cradles of Christianity in China, is were authorities have posted socialist literature on church noticeboards, the latest efforts to align the Bible with the party.

This comes after a campaign, which fitfully remains in effect, is where the provincial government removed more than 1,800 crosses from churches.

The results of the conference highlighted that widening gap between Beijing and the Vatican regarding the church.

China is determined to bring religion under tighter party control while the Holy See is committed to the Catholic Church's concept of ‘inculturation' a process where the Gospel engages with a local culture, said a Catholic commentator in northern China using the pen name Yu Si.

"Inculturation means how to blend the local culture to fit into church doctrine while ‘Sinicization' is to change the doctrine to fit local (one party) politics," he told ucanews.com.

In an effort to try and combat foreign religions, China's indigenous religion Daoism and the philosophy of Confucianism, which has a quasi religious status in the Middle Kingdom, have enjoyed a government-backed revival under Xi.

State publishers have printed books of Xi's many Confucian quotes and Qufu, the birthplace of the sage in Shandong province, has seen hundreds of millions of dollars of investment since Xi visited in late 2013.

Part of Xi's efforts toward making religion more Chinese have included orders for the first time in the party's history forbidding party cadres from following a faith — as well as the continuation of longstanding orders on a ban by active cadres.

However, reality is at odds with party edicts. An internal survey showed 90 percent of party members have an additional belief besides Marxism, Hong Kong-based Trend magazine reported this month.

While trying to excise religion from the party, the organization's propaganda machine, has attempted to gather religious leaders, albeit party affiliated clergy, behind Xi's message.

An article by Xinhua April 25 cited religious leaders including Father Paul Lei Shiyin in Leshan Diocese in Sichuan Province saying Xi's vision for religions would help address a shortage of clergy while overcoming other unspecified difficulties. This is a move that appears to certainly increase the number of state appointed clergy and which will irk the Vatican.

Xi's comments after the summit are the latest steps in a nationwide policy aimed at re-instilling faith in the party, one of a series of policies built around his idea of "rule of law," said William Nee, a Hong Kong-based researcher at Amnesty International.

"The Communist Party continues to send the clear message that there must be a clear separation of religious practice and political participation, except when it comes to supporting the party," he said.