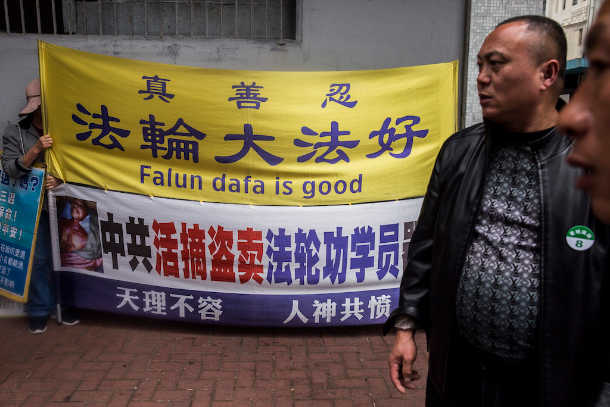 A Falun Gong activist holds a sign next to men from a mainland Chinese tour group in the Kowloon district of Hong Kong on Jan. 6. Considered a spiritual movement, Falun Gong (also known as Falun Dafa) is banned on the mainland but can be practiced in Hong Kong. A tribunal has ruled that China is murdering Falun Gong members and harvesting their organs for transplant. (Photo by Isaac Lawrence/AFP)

An independent tribunal has concluded that China is murdering members of the Falun Gong spiritual group and harvesting their organs for transplant.

Members of the China Tribunal in London said they had heard clear evidence forced organ harvesting had taken place over at least 20 years, the Thomson Reuters Foundation reported.

“The conclusion shows that very many people have died indescribably hideous deaths for no reason, that more may suffer in similar ways and that all of us live on a planet where extreme wickedness may be found in the power of those, for the time being, running a country with one of the oldest civilizations known to modern man,” said Sir Geoffrey Nice, the tribunal’s chairman.

“There is no evidence of the practice having been stopped and the tribunal is satisfied that it is continuing.”

Beijing has consistently denied accusations by rights groups and researchers that it forcibly takes organs from prisoners of conscience, claiming it stopped using organs from executed prisoners in 2015.

Falun Gong is a spiritual group based around meditation that China banned 20 years ago after 10,000 members staged a silent protest in Beijing. Thousands of members have since been jailed.

The tribunal, which was set up by the International Coalition to End Transplant Abuse in China, said it was less clear if Uyghur Muslims, Tibetans and Christian sects had been victims of organ harvesting.

The tribunal found that waiting times for organ transplants offered by hospitals in China were extraordinarily low, The Guardian reported.

"Organ trafficking is often overlooked in our sector but this heinous crime needs more attention and affects us all," said a spokesman for the Human Trafficking Foundation.

China insists it adheres to international medical standards that require organ donations to be made by consent and without payment. It declined to participate in the tribunal.

Ucanews.com reported in February 2017 that two Chinese health officials who attended a Vatican summit on organ trafficking had themselves been accused of forced organ harvesting by medical experts.

Huang Jiefu, a former vice minister of health, and Wang Haibo, who was responsible for China's organ transplant database, attended the Vatican's summit of the Pontifical Academy of Sciences that month.

Wang Zhiyuan, a China-trained doctor who moved to the United States, said both men were heavily involved in organ harvesting from prisoners of conscience in China.