Uyghur men make their way to the Id Kah mosque for afternoon prayers in Kashgar, in China's western Xinjiang region, in this file photo. Chinese authorities have restricted expressions of religion in Xinjiang in recent years such as wearing veils, fasting during Ramadan and young men growing beards. (Photo by Greg Baker/AFP)

Authorities in northwest China’s Xinjiang region are doubling down on a bid to prevent Muslim Uyghurs from fasting and praying during Islam’s holy month of Ramadan by embedding Chinese officials in their homes, according to official sources.

While authorities in Xinjiang have typically forced restaurants to stay open and restricted access to mosques during Ramadan to discourage traditional observation of the holy month, officials in Hotan (in Chinese, Hetian) prefecture said the local government is taking more drastic steps this year by assigning ruling Chinese Communist Party cadres to each Uyghur family for monitoring purposes.

In addition to regular home searches, the Hotan government had launched a campaign called "Together in Five Things" a day ahead of this year’s May 26 to June 24 Ramadan period, during which Chinese officials will stay with each Uyghur household for up to 15 days to make sure residents neither fast nor pray, the sources told Radio Free Asia (RFA).

Subscribe to your daily free newsletter from UCA News
Thank you. You are now signed up to Daily newsletter
"Inspections are conducted during iftar [a meal eaten by Muslims after sunset during Ramadan] when houses with lights on are checked — that is how we carry out patrols and inspections," a police officer in Hotan city told RFA, speaking on condition of anonymity.Designated cadres visit the home of each family every day, he added, and every ten cadres report to a higher level official."It’s all about keeping close to the people. During this period, they [officials] will get to know the lives of the people, assist in their daily activities — such as farming — and propagate laws and regulations, party and government ethnic and religious policies, and so on," he said."They stay at farmers’ homes to inquire after their ideological views."
Related News 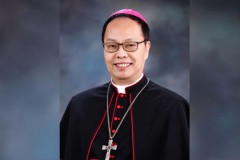