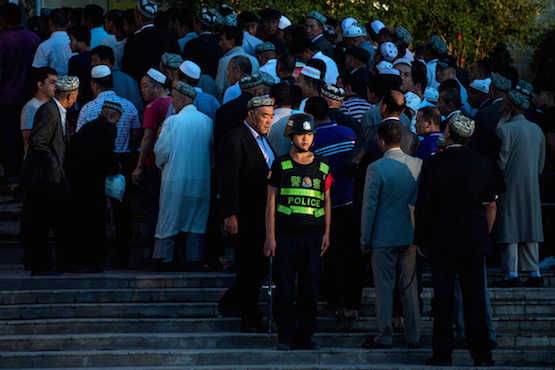 This picture taken on June 26 shows a policeman standing guard at the Id Kah Mosque in Kashgar in China's Xinjiang Uyghur Autonomous Region. Officials have admitted that thousands of Uyghurs and Muslims from other ethnic minorities are being detained in re-education camps to combat Islamic extremism. (Photo by Johannes Eisele/AFP)

Authorities in China's Xinjiang region are holding thousands of Uyghurs and Muslims from other ethnic minorities incommunicado in re-education camps in a bid to counter extremism, local officials have said.

The camps are known as "Professional Education Schools," and were set up in early 2017 as "Counter-extremism Training Schools," an official told Radio Free Asia (RFA).

Its believed the camps are located across the region and contain Muslim detainees from the Uyghur, Kyrgyz and Kazakh communities under policies introduced by hard-line Xinjiang Communist Party chief Chen Quanguo.

People detained include "blacklisted people; 'suspicious people' who have some fundamental religious sentiment; and the people who have relatives abroad," one female police officer in western Xinjiang said.

The officer from Ujme, in Aktu County, Kizilsu prefecture, said three education camps have been set up in Aktu County, with the largest located near the city of Kashgar.

"Around a thousand people are detained here," she told RFA.

A second Aktu policewoman from in Pilal Township claimed "several thousand detainees" were undergoing re-education in camps in the county.

She described the facilities as "closed schools" because authorities keep internees "detained day and night, and they continuously receive political and ideological education."

"A few people are released after two or three months. But most detainees are sent to the camps indefinitely," said the policewoman.

The New York-based advocacy group Human Rights Watch on Sept. 10 called for the detainees to be freed and the camps closed down.

"The Chinese authorities are holding people at these 'political education' centers not because they have committed any crimes, but because they deem them politically unreliable," said Sophie Richardson, China director at Human Rights Watch.

"The government has provided no credible reasons for holding these people and should free them immediately," she added.