China detains dozens after raids on Islamic schools in Xinjiang 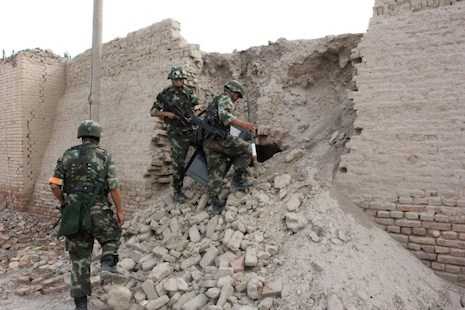 The sweep in the regional capital Urumqi was reportedly among the largest to date as authorities increasingly crack down on illegal religious activity after a series of deadly attacks in western China blamed on Islamic separatists.

Recent raids were part of an ongoing campaign against the “three illegals,” said the Legal Daily using the official term for unsanctioned religious publicity materials, activities and teachings.

Last month, authorities said they “rescued” 82 children in Urumqi from madrassas which also remain illegal in Xinjiang, home to millions of minority Uyghurs and other Muslims.

Although Islam is one of five sanctioned faiths in China, schools across the country are not allowed to offer religious instruction.

“Only in the politics class will there be a few chapters introducing the main religions in the world, which includes Islam. Apart from that, there’s no class on religion [in Xinjiang],” said Xiaofeng Chen, a Beijing-based spokesman for Save the Children, which runs education programs in Xinjiang.

Muslims from the region contacted on Monday by ucanews.com – all of whom declined to be named for security reasons – warned the government’s ban on religious education was pushing extreme Islamic teaching further underground.

“The discrimination and lack of normal religious education has helped greatly in spreading radical thought among young people, including many of my friends,” a Muslim man in his early 30s in Urumqi said by telephone.

Recent restrictions have extended to a ban on young men with beards traveling on buses in Karamay City, and in Shayar County local authorities issued notices in May offering to pay people up to US$8,000 for reporting on illegal religious activity.

People under 18 years old are not permitted to attend mosques in Xinjiang, where restrictions remain more severe than in other Muslim areas of the country as the government attempts to contain an Islamic separatist movement.

Rights groups outside of China have warned that such measures are fueling a recent surge in attacks linked to Uyghur separatists that have left at least 323 people dead since April last year, according to the state news agency Xinhua.

But one Muslim man in Urumqi, who also declined to be identified, said Beijing’s restrictions against Muslims in Xinjiang were likely to be effective in containing the spread of Islam.

“People, especially women and young people who are not allowed to mosques due to tradition and by the government have the need to learn religious knowledge; otherwise, the religious population is getting older and disappearing gradually,” he said.