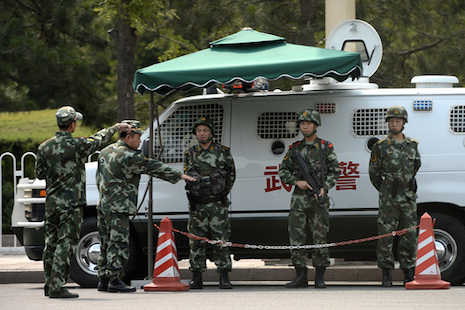 Armed Chinese police stand guard on the Avenue of Eternal Peace leading to Tiananmen Square on the 25th anniversary of the crackdown on pro-democracy protests in Beijing, June 4, 2014 (AFP Photo/Goh Chai Hin)

Chinese authorities have detained dozens of outspoken dissidents and rights activists across the country ahead of the anniversary of the 1989 military crackdown on the democracy movement, placing some under house arrest and forcing others to go “on vacation” with police.

Among those targeted by state security police was Bao Tong, 82, a former top ruling Chinese Communist Party aide to late former premier Zhao Ziyang, who fell from power in the wake of the 1989 "Beijing Spring."

"He left on [Saturday]," Bao's wife Jiang Zongcao, who remained at the couple's Beijing home, told RFA on Tuesday.

State security police had knocked on the door of the couple's home where Bao has been under house arrest since his release from a seven-year jail term in the wake of the 1989 crackdown, told him to gather a few personal belongings, and taken him "on vacation," she said.

"I don't know [where they took him], and they didn't say when he was coming back," Jiang said. "They just left ... They don't tell you about it in advance."  Jiang said Bao's granddaughter had gone with him.

"Somebody from the family needs to be with him at night in case something happens, and he needs people around him in the daytime, too, for his safety," she said.

"He is over 80 years old, and we had got all his medication ready," Jiang added. "My granddaughter will contact me if anything goes wrong."

"He took his meds ... and they won't stop his relatives from contacting me," she said.

Last year, Bao was taken to his ancestral hometown of Haining in the eastern province of Zhejiang just before the 25th anniversary of the June 4 bloodshed, returning on June 11.

Bao, who was jailed for "leaking state secrets" and "incitement of counterrevolution," is also under an annual ban on making public comments or speaking to journalists around June 4.

Clampdown on dissent outside Beijing

The annual clampdown on dissent isn't just confined to the capital.

"I can't really talk about this right known because they are right here with me now," Ma, a former journalist for Shaanxi provincial state television who was jailed after covering a farmers' tax protest in 1999.

But he said many other activists in the northern city had received visits or phone calls from state security police in recent days.

"Some people in Xi'an have already been contacted," Ma said. "They told me that there was one guy, Ma Yuzhong, who they tried to force to go on vacation."

"He told them he couldn't because his wife is hemiplegic," he said, referring to a condition in which one side of the body is paralyzed.

"It really has become a day of remembrance; one observed by the government," Ma said.

But he added: "I can't really say any more now."

Ma's residential surveillance comes after Xi'an-based veteran dissident Yang Hai was forced to leave his him on Saturday.

Meanwhile, more than 20 activists in the central province of Hunan are either under surveillance at home or are incommunicado, the Weiquanwang rights group said this week.

Among them was dissident Ouyang Jinghua, detained by state security police on Sunday, while Hunan democracy activist Li Zanmin was taken away after suggesting an event to mark the alleged 2012 suicide in police custody of veteran Tiananmen activist Li Wangyang.

Meanwhile, authorities in the southwestern region of Guangxi told veteran 1989 activist Wang Debang he would have to "take a vacation," but hadn't yet enforced it, he said on Tuesday.

"I live a long way out from the downtown area of the city, in a small village in a rural county under Guilin's jurisdiction," Wang said.

"They are so jumpy and paranoid ... I think that all the Tiananmen Mothers [victims' group] are under surveillance in Beijing right now," he added.

Authorities in the southern province of Guangdong took Zhuhai-based activist Zhen Jianghua out for dinner to discuss surveillance arrangements for June 4, the Hubei-based Civil Rights and Livelihood Watch website reported.

And Dongguan-based activist Hu Haibo said he is being required to report his daily activities to police, and promise not to "engage in activism over a sensitive period," it said.

Beijing bans public memorial events and open political discussion around the events of June 3-4, 1989, when the People's Liberation Army (PLA) deployed troops with machine guns and tanks to put an end to weeks of mass student-led protests on Tiananmen Square.

Officials have ignored growing calls for a reappraisal of the "counterrevolutionary rebellion," and to bring the perpetrators of the massacre to justice.

The Tiananmen Mothers, which has campaigned for 26 years for official redress for the loss of their loved ones, on Monday said Beijing should bear as much historical responsibility for the 1989 massacre as Japan's leaders should bear for the country's war of aggression in China during the 1930s.

"The leaders of a state not only inherit their predecessors ‘successes, but should also bear historical responsibility for their predecessors' crimes," the group said in a statement issued via the New York-based group Human Rights in China (HRIC).

"By the same logic, shouldn't today's Chinese leaders bear responsibility for the series of crimes — man-made famine and slaughter — perpetrated in their own country by China's leaders at the time: Mao Zedong and Deng Xiaoping?" the Tiananmen Mothers said in a lengthy commentary published on HRIC's website.

Reported by Qiao Long for RFA's Mandarin Service and by Ho Shan for the Cantonese Service. Translated and written in English by Luisetta Mudie.