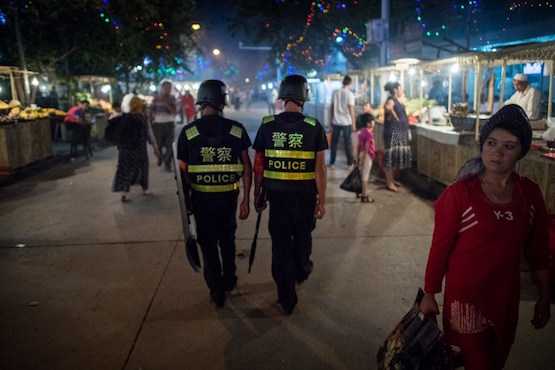 This picture taken on June 25, 2017 shows police patrolling in a market near the Id Kah Mosque in Kashgar in China's Xinjiang Uighur Autonomous Region, a day before the Eid al-Fitr holiday. The increasingly strict curbs imposed on the mostly Muslim Uyghur population have stifled life in the tense Xinjiang region, where beards are partially banned and no one is allowed to pray in public. Analysts warn that Xinjiang is becoming an open air prison. (Photo by Johannes Eisele/AFP)

The fate of 11 Uyghurs in Malaysia who had escaped a Thai detention center last year now hangs in the balance as Beijing demands their return to China.

The group of 11 were among 20 who escaped the detention center, and were detained in Thailand in 2015 — along with some 200 other Uyghur asylum seekers from China.

Malaysia may be likely to deport the Uyghur asylum seekers, given the fact the government detained three Turkish nationals in May last year and forcibly deported them.

Malaysia is currently in talks with Thailand regarding the issue, but neither side has at this time reached a resolution — and continues to hold the asylum seekers.

"We must remember that the Uyghurs in question have been held at immigration detention facilities for nearly four years now without charge or access to legal representation – an egregiously long time to spend effectively in limbo after escaping China," Peter Irwin, a project manager for the World Uyghur Congress, told ucanews.com.

"There is no justification for continuing to hold these men in custody and they should be allowed to move to a safe third country according to international law."

The World Uyghur Congress is an international organization of exiled Uyghurs lobbying for the Muslim ethnic minority's collective interests, based in Munich.

A U.S. State Department spokesperson voiced disquiet earlier this month to Reuters over China's pressure on Malaysia, saying in an email that "we are concerned by media reports regarding Malaysia's possible deportation of [Uyghur] individuals to China."

Chen has come down particularly hard on Islam, along with tracking people's phones, vehicles and movements.

Chen has also sparked the proliferation of re-education camps, where Uyghurs are interned and often forced to denounce their religion and customs; they are instead exposed to Chinese propaganda.

Human Rights Watch has also called on the Malaysian government not to expel the Uyghur asylum seekers.

"Uyghurs forcibly returned to China face credible threats of imprisonment and torture, so it's critical that Malaysia does not forcibly expel to China anyone the Chinese claim is a Uyghur," said Brad Adams, HRW Asia director, in a statement released earlier this month.

Malaysia's expulsion of the Uyghur asylum seekers to China would contravene customary international law, which ensures that those in custody are not sent to a place where they would be subjected to major human rights violations.

The Malaysian Bar Association last week warned that forcible deportation of these Uyghurs would violate this international law.

However, in December 2012, Malaysia deported six Uyghurs back to China — despite the fact that all six had refugee status determinations under review with the office of United Nations High Commissioner for Refugees.

The some 200 Uyghurs who escaped China in 2014 were heading to Turkey, but were intercepted in Thailand's southern Songkhla province.

Thailand forcibly returned 100 of those Uyghur detainees to China that same year.