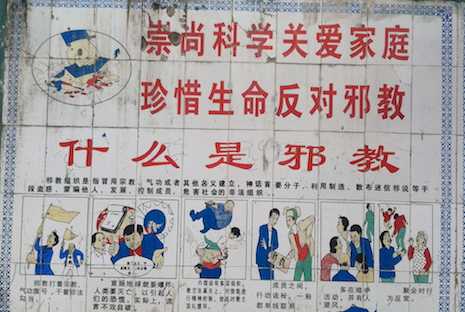 A government notice in Henan province warns against cults (Photo by ucanews.com)

When two underground pastors were sentenced to three and four years in prison for “using a cult to undermine law enforcement” in late May, confusion reigned in and outside of the courtroom in Shandong province.

Protesting outside, Zhao’s wife Liu Cuiping complained her husband had never heard of the banned Christian cult he was accused of joining.

“It was only because of this case that we gradually learned about the Total Scope Church,” she said.

As Chinese authorities accelerate a campaign against religious cults, Christian groups warn that house churches — the unregistered underground churches that operate in a legal gray area — have increasingly found themselves caught in the crackdown.

So far this year, dozens of house churches have been forcibly closed and their members arrested, according to a US congressional commission on China led by Senator and Republican presidential candidate Marco Rubio late last month.

“Unfortunately, the persecution of the house church continues to worsen in 2015,” Bob Fu, the director and founder of China Aid, testified in the hearing in Washington D.C.

The catalyst appears to be Beijing’s desire to wipe out unorthodox Protestant sect ‘Church of Almighty God’.

What constitutes a cult?

In May last year, five members of the same family were caught on security cameras beating a woman to death in a McDonald’s restaurant in Shandong. The case shocked many in China, receiving wide coverage on blogging sites and in state media.

“Almighty God is not only a bad influence in the church, it’s also truly [bad] for society,” wrote one user last year on Weibo, China’s equivalent of Twitter.

Zhang Lidong and daughter Zheng Fen were executed for the killing in February. In the two months after the attack, Chinese police arrested about 1,000 suspected members of the Church of Almighty God, according to state media, which has increasingly publicized its crackdown against the sect.

Last month, at least 19 of its members were sentenced to between 18 months and four years in prison in three separate trials, state media reported.

Zhao Weishan, who founded the group — also known as Eastern Lightning — in 1990 and has reportedly fled to the United States, did not respond to questions emailed through the Church of Almighty God’s listed office in the US.

Based on the idea that Jesus was resurrected in China in the form of a woman, the Church of Almighty God is one of dozens of religious cults banned in China.

In the late 1990s, as Beijing looked to banish the increasingly popular Qi Gong sect Falun Gong, it passed an anti-cult law, and has since added the names of other groups deemed to be “damaging social orders and stability”.

But there is little consensus on what constitutes an illegal cult, even among government departments.

After the McDonald’s killing last year, the government published the names of 14 illegal cults. Meanwhile, the state-backed China Anti-Cult Association (CACA) has identified 20 such groups, the vast majority Christian.

In one ongoing case, eight members of a house church in Guizhou province were detained for “organizing cult activities” following a police raid on May 24.

Among those detained was Dai Xiaoqiang from another house church in Zhejiang, thousands of kilometers further east. But despite defense lawyers producing a letter stamped by the district Ethnic and Religious Affairs Bureau in Zhejiang confirming Dai’s church is not a cult, all eight Christians remain in police custody.

“In Zhejiang, he [Dai] is considered a good man, but in Qianxi County [Guizhou province], he is a captured member of a suspected cult,” wrote Dai’s lawyer, Zhuang Daohe, in an open letter to Guizhou Governor Chen Min’er on July 12.

“Such logic is not very reliable and subverts common sense.”

As part of a renewed publicity campaign by the government across China, many posters have singled out the Church of Almighty God as an illegal organization. Other public notices in rural areas, including in Henan province adjacent to Beijing, talk of cults generally while urging Chinese to “rely on science”.

“There should be an increase in rural culture construction, especially to strengthen the grassroots governance capacity, which in turn will shrink the space available for underground churches and cults.”

Fu of China Aid argues that the government’s confusing of cults with legitimate Christian worship not registered with the state — particularly house churches — appears increasingly deliberate.

“This is not only part of the effort from the government to force religious activities under its control but also a strategic step to change the authentic doctrines of religion — especially Christianity — in order to make religion ‘compatible with socialism’,” he told ucanews.com.

The situation facing legitimate Christian worshippers is only likely to worsen, warns Fu. China is currently drafting amendments to the Criminal Law that could raise the maximum penalty for cult activities from 15 years to life imprisonment, according to state news agency Xinhua.

The Chinese government is facing public pressure to crack down on cults in the wake of the McDonald's attack, a move welcomed by many mainstream churches in China alarmed at the growth of unorthodox sects.

But these same Christian groups have become fearful they are being caught in the anti-cult crossfire, says a China researcher at Christian Solidarity Worldwide (CSW) who declined to be named for security reasons.

“In a worst-case scenario, churches could be left with two choices: join the state-sanctioned church or be labeled a cult,” the CSW researcher told ucanews.com.

“We are still a long way from this scenario, but the space for unregistered religious activities does appear to be shrinking.”