China complicit in halting aid to Kachin in Myanmar 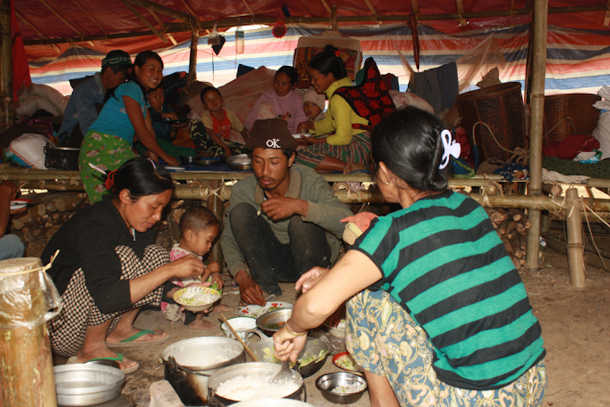 Kachin refugees are shown at a camp in Nongdao district of China's Yunnan province in this January 2012 file photo. The province borders Myanmar. (ucanews.com photo)

Myanmar's military and civilian authorities are blocking humanitarian aid from being delivered to thousands of displaced ethnic Kachin in conflict-torn Kachin State due to pressure from Beijing, according to a new report.

The majority of the state's 1.7-million Kachin are Christians, including 116,000 Catholics.

Bangkok-based Fortify Rights said in its Aug. 30 report that the Chinese government has been privately urging Myanmar authorities and non-state ethnic armies to prevent U.N. and other aid organizations from operating on the Myanmar side of the border opposite China's Yunnan province, where tens of thousands of Kachin civilians remain displaced and in need of help.

David Baulk, a Myanmar human rights specialist with Fortify Rights, said Chinese involved in Myanmar's peace talks with its armed ethnic groups have repeatedly made it clear that they view international humanitarian groups as "proxies for Western governments," especially the U.S.

The Chinese representatives stressed they did not want such groups operating on the Myanmar-China border, Baulk said.

"Humanitarians delivering food, medicine, shelter and other life-saving materials should be welcomed by the Chinese government. Instead, Beijing is working in cahoots with Naypyidaw to make life almost unbearable for displaced communities in Kachin and northern Shan states," he told ucanews.com.

Beijing wants to "stabilize" the border by strangling displaced communities in areas currently under the control of the Kachin Independence Army (KIA), Baulk said.

The Myanmar and Chinese governments believe they can force the KIA into signing a peace agreement on their own terms by creating an environment in Kachin that is "more conducive to business," he added.

Bertil Lintner, a Swedish journalist and long-time Myanmar expert said it is probably true that China has urged the ethnic armed organizations (EAOs) not to accept aid from Western sources.

The U.N. now has almost no access to KIA-controlled areas, he said.

"The Chinese obviously want to control what — and who — is going in and out of those areas," Lintner said.

Aid workers say the military has imposed more restrictions on humanitarian groups and has banned any new camps for internally displaced people (IDPs) from opening.

Workers have also been threatened with charges of "unlawful association" if they provide aid in areas controlled by the KIA, according to reports.

On May 21, Col. Thura Myo Tin, Kachin's security and border affairs minister, sent a letter warning members of the Kachin Baptist Convention (KBC) that they must stop visiting the IDP camps near the Chinese border or risk being charged under Article 17(1) of the Unlawful Association Act as the camps are in KIA-held territory.

Naw Din, program coordinator of the local branch of the Catholic Church's charity arm Caritas, said this sent a strong signal not only to the KBC but to all aid groups operating in the region.

"We're being very careful about traveling and providing aid right now. We have to find ways to protect our workers from any added risk," said Naw Din.

The U.N. and its partners are finding it increasingly hard to obtain authorization from Myanmar for government-led groups to travel to the country, with most now only being granted access to major towns.

"Access constraints have a serious impact on the protection and welfare of conflict-affected people, including women, children and elderly people," the U.N. Office for the Coordination of Human Affairs (UNOCHA) said in a report.

Myanmar's army conceived its so-called "Four Cuts" strategy in the late 1960s as it battled the now-defunct Communist Party of Burma, as well as various ethnic armed groups.

The strategy entails cutting rebel groups' access to food, funds, new recruits and information, largely by removing the civilian population from their areas of activity.

A U.N. Fact-Finding Mission report released on Aug. 27 confirmed there have been consistent violations of international law in Kachin, Rakhine and Shan states.

The mission said Myanmar's top generals should face prosecution for crimes against humanity including genocide and war crimes.

China and Russia are expected to levy more pressure on Myanmar to stop such cases being referred to the International Criminal Court (ICC) by drawing on their power to veto at the U.N. Security Council, pundits say.

Both countries have proven themselves to be very supportive of Myanmar's handling of the Rohingya Muslim crisis in Rakhine, despite calls from the international community for more accountability and justice.

Local faith-based groups have resorted to clandestine humanitarian missions to make sure aid keeps getting through to IDPs near the Chinese border as U.N. agencies have been struggling to gain access for nearly two years.

Naw Din said aid workers are facing even more restrictions under Aung San Suu Kyi's government, however, and now require permission from state authorities even to operate in government-controlled areas.

Karuna (Caritas) has even been working to set up links with Chinese traders to offer aid to those in need.

"Amid all these difficulties, we're trying to find different ways to ensure those in dire straits along the border get what they need to survive," Naw Din, an ethnic Kachin, told ucanews.com.

Every time a fresh round of fighting erupts between the military and the KIA, security along the border is tightened and aid workers report facing more thorough checks from Chinese border guards and patrols.

Naw Din said thousands fled to China when the fighting flared up in August 2012 but Beijing forcibly returned them to Kachin State.

"Stability means no fighting and peace. Justice and human rights do not matter, in their eyes," added the bishop, who also serves as chairman of Karuna Myanmar (Karuna is the local name for Caritas).

Since 2011, the Church has provided not only spiritual support but also humanitarian assistance to people in IDP and other refugee camps.

Renewed fighting in Kachin State between the KIA and army has forced over 100,000 people into 142 camps in Kachin and Shan.

Nearly 40,000 of these people are living in territory that is not controlled by Myanmar's government, according to the U.N.