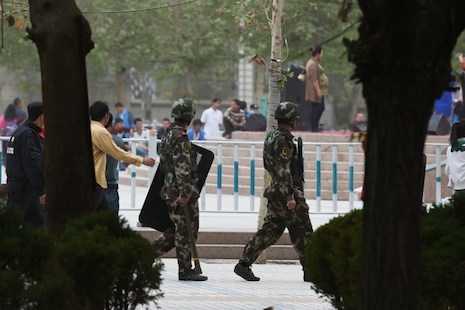 More than 92 percent of groups were raided while planning attacks and 112 suspects turned themselves into security services, according to an assessment of the security operation by Xinjiang’s regional Communist Party committee.

Few other details were given about the impact of the campaign, which was announced by China’s President Xi Jinping the day after Uyghur separatists killed 43 people at a crowded market in Xinjiang’s regional capital Urumqi on May 22 last year.

“We must solve the problems of tradition with respect and handle religious issues with the rule of religion,” Shohrat Zakir, the newly appointed acting chairman of Xinjiang, said last week during a regional government meeting. “Meanwhile, we must use the rule of law to crack down on terrorism.”

The government has in the past year posted thousands of additional security forces in the vast northwestern region and resumed mass trials for the first time since the 1990s.

Last year, the number of criminal trials soared 40 percent in Xinjiang to nearly 30,000, even as cases of endangering state security were flat, according to figures recently released by Xinjiang’s High Court.

China has executed over 20 Uyghurs and sentenced many more to death during the campaign, which has seen authorities rush trials and appeals with many suspects denied independent legal counsel, lawyers have told ucanews.com over the past year.

Bloody attacks appeared to slow down in Western China immediately after the strike-hard campaign was launched. However, regular violence soon returned with at least 500 killed during 2014, the bloodiest year on record in terms of Xinjiang-related violence.

Reports suggest authorities are trying to conceal news of attacks in a bid to paint a picture of growing stability: many violent incidents in remote Xinjiang are not covered by China’s heavily censored media.

“In fact, due to the widespread fear and resentment that the strike-hard campaign and its clampdown on Uyghurs’ human rights are having, many people assume that things are getting worse across the board,” said William Nee, a China researcher for Amnesty International based in Hong Kong.

The anti-terror campaign in Xinjiang was originally announced to last one year but was recently extended until at least the end of 2015.

The government is drafting a new anti-terrorism law designed to add legal weight to the fight against Islamic separatism in Xinjiang, a draft of which has been heavily criticized by rights groups for its vague and sweeping powers.

“Perhaps what is most worrying about the ‘strike-hard’ campaign is that it was supposed to be only one year long, but instead it was extended throughout all of 2015, and many of its worst elements are now built into the draft anti-terrorism law,” said Nee. “The law would be a targeted assault on freedom of religion and expression, as well as the rights of ethnic minorities.”