Elderly Catholics guard the gate of a former church hospital in the Chinese city of Tianjin after the death of Maria Fan Junying, a laywoman who was guarding church property. (Photo courtesy Yishi journal)

Chinese Catholics in the northern coastal city of Tianjin fear nothing will come from official investigations into the death of a laywomen injured while protecting disputed church property from men believed to working for a corrupt land developer.

Local Catholics told ucanews.com they believe local authorities will not deal fairly over circumstances that lead to the death of Maria Fan Junying because the land developer has political connections.

The disputed property — next to St. Joseph's Cathedral, commonly known as Xikai Church — was originally a hospital founded by the nuns of the Congregation of Charity. It was confiscated by the communists in 1949, was meant to be returned to the church three years ago according to law but was instead sold to a developer.

"Heping district is in the central downtown area where there is currently not much space available for development. The developer must have strong political backing to be able to obtain a piece of land there," said a layman who asked not to be named.

"So, the government officials of course would defend the land developer. The hope for Xikai Church to win the case with regards to Fan's death is dim," he added. Fan died of cerebral hemorrhage on July 30, four days after more than 20 men armed with power tools attempted to open the gate of the disputed church property in the middle of the night. 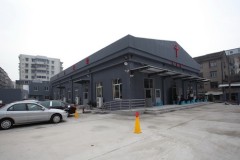 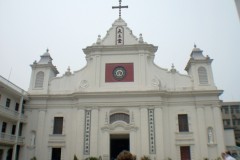 Damage to historic Shanghai church is part of a 'plot'

A layman told ucanews.com that the men were sent by a land developer. Middle-aged Fan was one of several local Catholics guarding the disputed property.

The men started shouting threats and hitting the gate near where Fan was seated with three other women. It is unclear what occurred next but amid the confusion Fan fell to the ground complaining of pain in her head.

She reportedly said that her "brain felt like it was breaking apart." After being hospitalized, Fan fell into coma and died of cerebral hemorrhage days later.

In response to the incident, the city government has asked St. Joseph's Cathedral officials and the developer to separately report on what occurred, the layman said. Government officials have also discussed compensation for Fan's family.

Another church source told ucanews.com that Fan's family is living in fear of what the developers might do to them if they press for investigations into the incident.

"Her family does not dare cooperate with the church to seek justice for her. They chose to bury her body quickly," the source added. After its confiscation by the communists, the hospital founded by the Congregation of Charity was turned into a public hospital — the Tianjin Central Hospital for Gynecology and Obstetrics. According to Chinese law, if former church property was used as a school or hospital, it would not need to be returned to the church unless it was no longer in use, said the local layman.

"However, after the hospital relocated in 2014, the Heping District government did not return the property to the church," the layman said. "Instead they sold it to the developer, who also obtained a land use permit, which means he now has legal right to develop the plot of land," he said.

In response, Fan and other local Catholics blocked the gates that led to the site and demanded that the government return the property, he said.

Local Catholics still worry that the land developer would make another break-in attempt, so they continue to guard at the property in shifts, he said.

With 115,000 Catholics, Tianjin Diocese has two underground bishops who are not recognized by the government. But most of the 37 priests in the open church community have already pledged obedience to the two bishops, along with 17 underground priests.

Bishop Stephen Li Side of Tianjin, 91, is not allowed to leave his parish in a mountainous area of Jizhou Diocese of Tianjin while Coadjutor Bishop Shi Hongzhen, 89, has freedom to move around only in Tianjin as he is recognized only as a priest by the government.

Both bishops are not allowed to exercise their episcopal ministries.