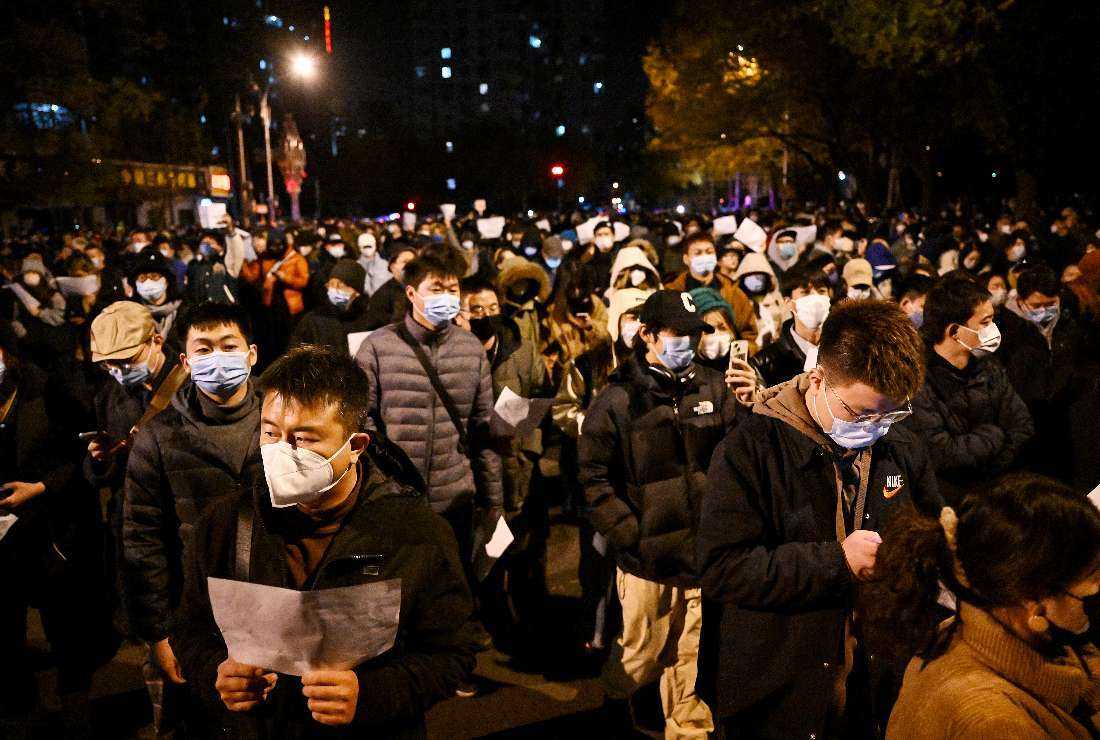 Protesters march along a street during a rally for the victims of a deadly fire as well as a protest against China's harsh Covid-19 restrictions in Beijing. (Photo: AFP)

China's censors were working Monday to extinguish signs of rare, social media-driven protests that flared across major cities over the weekend calling for political freedoms and an end to Covid lockdowns.

Sunday saw people take to the streets in several major cities across China to call for an end to lockdowns and greater political freedoms, in a wave of nationwide protests not seen since pro-democracy rallies in 1989 were crushed.

A deadly fire last week in Urumqi, the capital of northwest China's Xinjiang region, has become a catalyst for public anger, with many blaming Covid lockdowns for hampering rescue efforts.

But they have also featured prominent calls for greater political freedoms -- with some even demanding the resignation of China's President Xi Jinping, recently re-appointed to an unprecedented third term as the country's leader.

Large crowds gathered Sunday in the capital Beijing and Shanghai, where police clashed with protesters as they tried to stop groups from converging at Wulumuqi street, named after the Mandarin for Urumqi.

Crowds that had gathered overnight -- some of whom chanted "Xi Jinping, step down! CCP, step down!" -- were dispersed by Sunday morning.

But in the afternoon, hundreds rallied in the same area with blank sheets of paper and flowers to hold what appeared to be a silent protest, an eyewitness told AFP.

In the capital, at least 400 people gathered on the banks of a river for several hours, with some shouting: "We are all Xinjiang people! Go Chinese people!"

AFP reporters at the scene described the crowd singing the national anthem and listening to speeches, while on the other side of the canal bank, a line of police cars waited.

An AFP journalist at the scene of the Shanghai protests Monday morning saw a substantial police presence, with blue fences in place along the pavements to stop further gatherings.

State censors appeared to have scrubbed Chinese social media of any news about the rallies, with the search terms "Liangma River", "Urumqi Road" -- sites of protests in Beijing and Shanghai -- scrubbed of any references to the rallies on the Twitter-like Weibo platform.

Videos including those showing university students singing in protest and rallies in other cities had also vanished from WeChat, replaced by notices saying the content was reported for "non-compliant or sensitive content."

The Weibo search for the hashtag #A4 -- a reference to the blank pieces of paper held up at rallies in a symbolic protest against censorship -- also appeared to have been manipulated, showing only a handful of posts from the past day.

But such widespread rallies are exceptionally rare, with authorities harshly clamping down on any and all opposition to the central government.

Protests also occurred on Sunday in Wuhan, the central city where Covid-19 first emerged, while there were reports of demonstrations in Guangzhou, Chengdu and Hong Kong.

Spreading through social media, they have been fuelled by frustration at the central government's zero-Covid policy, which sees authorities impose snap lockdowns, lengthy quarantines and mass testing campaigns over just a handful of cases.

State-run newspaper the People's Daily published a commentary Monday morning warning against "paralysis" and "battle-weariness" in the fight against Covid -- but stopped far short of calling for an end to hardline policy.

"People have now reached a boiling point because there has been no clear direction to path to end the zero-Covid policy," Alfred Wu Muluan, a Chinese politics expert at the National University of Singapore, told AFP.

"The party has underestimated the people's anger."

Investors were spooked by the weekend protests, with Asian stocks opening sharply lower on Monday morning.

China reported 40,052 domestic Covid-19 cases Monday, a record high but tiny compared to caseloads in the West at the height of the pandemic.