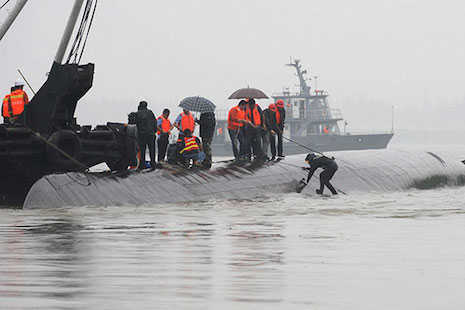 A diver walks into the water as rescue teams search for survivors from the Dongfangzhixing or 'Eastern Star' vessel which sank in the Yangtze river in Jianli, central China's Hubei province on June 2 (AFP Photo)

China's official censors moved on Wednesday to limit media coverage and online comments linked to the Yangtze River cruise-ship disaster, as rescue workers began cutting into the hull of the stricken vessel, with some 400 people still missing, feared drowned.

The ruling Chinese Communist Party's powerful propaganda department issued a directive banning Chinese journalists from traveling to the site of the wreck of the Eastern Star cruise ship in the central province of Hubei to cover the disaster.

In a directive leaked and then deleted on the Twitter-like platform Sina Weibo on Wednesday, authorities reminded all media outlets in China that all coverage of the ship's capsize in reportedly freak weather conditions late on Monday must be limited to approved copy published by the official Xinhua news agency, or state-run broadcaster CCTV.

"On June 2, 2015, the central propaganda department issued a directive: regarding the Eastern Star capsize incident, all provinces, regions and cities are forbidden to send reporters to the scene to conduct interviews," the user tweeted.

"Those who are already at the scene must be immediately recalled," the directive said.

"All media outlets are to use unified copy from Xinhua news agency and footage from CCTV," it said.

The user commented wryly: "It reminds me of the high-speed rail crash [in July 2011, south of Shanghai]. The truth will not out."

According to the China Digital Times website, which collates leaked directives from the propaganda department, the directive was issued on Monday, soon after the Eastern Star went down in 15 meters of water in Hubei's Jianli county.

Relatives of those missing have complained of a lack of information, as around 1,000 officials were mobilized to receive them and offer support.

A relative of a missing passenger, who gave only his surname Fu, said he had traveled on his own to Jianli county in search of news of his father, but that his movements are now highly restricted.

"The authorities are stopping and holding any relatives who go there," Fu said.

"If you show up at a hotel, they won't book you in, but they won't let you leave, either," he said.

Some relatives of the missing scuffled with officials in Shanghai amid growing frustration at the lack of information, Reuters reported.

Others took to the streets near the Shanghai municipal government in protest, the agency said.

A woman who gave only her surname Xiang said three of her relatives had been aboard the Eastern Star.

“They saved a man yesterday, who is one of my relatives, but there are still two more they haven't found," Xiang said.

"He has now been moved to a regular ward [in hospital]," she added.

Another relative, surnamed Zhu, said her grandmother is on the list of those still missing.

"We are waiting here at home for news," she said. "They haven't made arrangements for us to go there."

"If we did go there, everything would be under a security cordon, and we wouldn't be able to see anything," Zhu added.

"Some people from the [government] neighborhood committee are here to support us, and they told us not to go there," Zhu said.

"But they should give us an explanation of why so few people were saved out of more than 400."

Meanwhile, rescue workers began cutting into the ship's hull in a last-ditch bid to find survivors in any remaining air pockets, Xinhua news agency reported.  It said the Eastern Star was "hit by a tornado" late on Monday, and that rescue teams have found 14 survivors and retrieved just 26 bodies.

More than 400 people are still unaccounted for, it said.

Coverage of the disaster by state media has been relentlessly positive, focusing on the bravery and persistence of rescuers, and featuring footage of Premier Li Keqiang visiting survivors in hospital.

But online censors have been deleting almost any reference to the disaster, including simple retweets of official news items, according to the Free Weibo website.

Not all comments have fitted the general mode of shock, grief, and condolences, however.

Sina Weibo user @chenmaolai tweeted: "103 years ago, when the Titanic went down, 705 lives were saved out of 2208 passengers, and the death rate among the ship's crew was very high."

"When our Eastern Star sinks, only 14 are saved out of 458, and the captain and crew were far better equipped to save themselves than the passengers," the user wrote in a deleted tweet reposted by Free Weibo.

The captain and chief engineer have been detained by police for questioning, Reuters reported.

According to an initial investigation, the Eastern Star was operating under maximum capacity, and was adequately supplied with life jackets.

Beijing has suffered a number of high profile blows to its transportation safety record in recent years, with a storm of public criticism unleashed in the wake of the 2011 high-speed train crash near the eastern city of Wenzhou, south of Shanghai.

Regulators have also pointed out numerous problems with the country's ageing and ubiquitous river cruise ships, one of which caught fire on April 20, 2013 on the Yangtze at Wuhan, although all aboard were rescued.

Three months later, a safety report from the Nanjing maritime bureau said that life jackets on one vessel it inspected were kept under lock and key.

And two months earlier, eight people died after a similar passenger vessel collided with a cargo barge on the same stretch of river in Jianli county, official media reports said at the time.

Reported by Wen Yuqing for RFA's Cantonese Service, and by Yang Fan for the Mandarin Service. Translated and written in English by Luisetta Mudie.