Praise for efforts to reconcile with Beijing 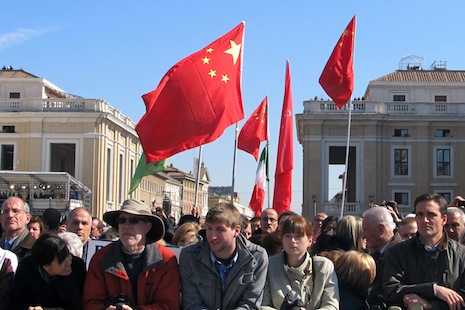 A group of Chinese Catholic clergy and faithful have sent a heartfelt letter to Pope Benedict XVI to thank him for his attempts to improve ties between the Catholic Church and China.

The text of the letter, dated February 22, was released by the Vatican on Thursday, the last day of Benedict's pontificate.

The Chinese Catholics – bishops, priest, religious men and women, and laypeople, according to the Vatican – say the February 11 announcement of Benedict's resignation came as “shocking and sad news,” in consideration of the “special affection” Chinese Catholics have for the now retired pope.

“Your Holiness has paid special attention to China and saved a special place for the Catholic Church in China in your heart,” the group's letter says. “You tried to promote dialogue and alleviate the cross we bear by showing concern and by blessing China and the Chinese people.”

In 2007, Benedict wrote a groundbreaking letter that attempted to bring a fresh start to relations between the Catholic Church and the Beijing government.

But his reconciliation efforts have been marred by renewed crises over bishop appointments and over the role of a government-backed Church association that is not recognized by the Vatican.

“We will never forget that, in the past eight years, there were only best wishes, friendly greetings and high hopes expressed in the messages you sent to China. No matter what conflicts and harm occurred, no matter how sad and disappointed we made you feel, you always embraced China and the Catholic Church in China with fatherly love,” the group's letter says.

Their letter concludes: “This not only moved the world, but also makes it difficult for us Chinese clergy and Catholics to say farewell to you."