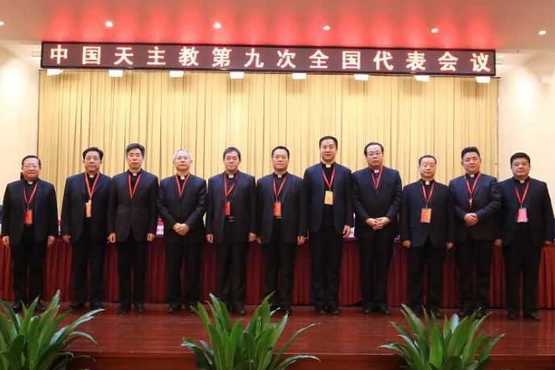 Majority of the elected and re-elected prelates in the bishops’ conference have dual approval from the Vatican and the Chinese government. (Photo supplied)

The three-day Ninth National Congress of Catholic Representatives entered its second day with most of the incumbent leaders re-elected for the next five-year term.

The 365 participants were on Dec. 28 divided into nine groups to study and discuss the work report of the Chinese Catholic Patriotic Association (CCPA) and the Bishops’ Conference of Catholic Church in China (BCCCC).

Bishop Ma Yinglin of Kunming and Bishop Fang Xingyao of Linyi were re-elected as heads of the BCCCC and the CCPA respectively. The election, as expected, saw for most part a reshuffle of incumbent leaders since they are still in their 50s.

The vice presidents of the BCCCC for the five- year term are Bishops Fang Xingyao, Shen Bin of Haimen, Zhan Silu of Mindong, Fang Jianping of Tangshan, Guo Jincai of Chengde, Pei Junmin of Shenyang, Li Shan of Beijing, Yang Xiaoting of Yulin (Yan’an), He Zeqing of Wanzhou (Wanxian) and Yang Yongjiang of Zhouchun.

Majority of them are bishops with dual approval from the Vatican and the Chinese government. Bishops Shen, He and Yang Yongjiang are newly elected to the BCCCC’s standing committee that now has an increased membership from six to nine. Group photo of elected and re-elected leaders of the Chinese Catholic Patriotic Association. Shi Xueqin, lay leader of Fujian (extreme right), is the first laywoman to be elected as vice president.  (Photo supplied)

The current congress has drawn media attention from in and outside China as negotiations between China and the Vatican have intensified since early 2016 to resolve the longstanding issue of bishops’ appointments, for which both sides claim authority to do so.

Speaking on Dec 27, the first day of the congress, Wang Zuo’an, director of State Administration for Religious Affairs also touched on this topic, admitting that China-Vatican relations have long been an issue of general concern for laity and priests, according to the Chinese government’s official Xinhua News Agency.

Wang told participants that China has always been clear and consistent in its position of improving relations with the Vatican. "China is willing, on the basis of related principles, to have constructive talks with the Vatican to narrow differences, increase consensus and promote improved relations," he said.

The Chinese government hopes that the Vatican takes a more flexible and pragmatic attitude as well as actual steps to create beneficial conditions for improving relations, he said.

Wang did not elaborate what the "related principles" are but Catholics in China told ucanews.com that he was referring to the state policy for a self-governing church independent of the Holy See as well as running the church in a democratic way -- both of which are incompatible to Catholic doctrine.