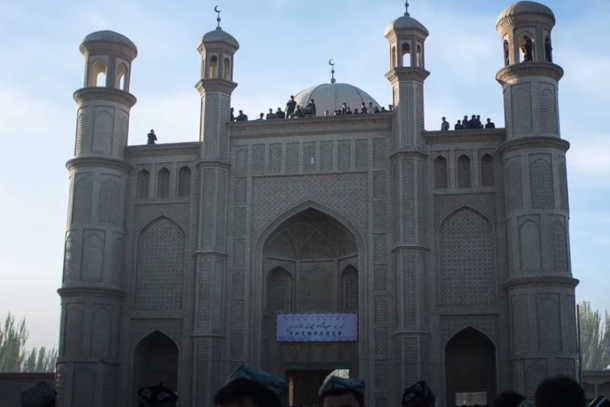 Aitika mosque in Xinjiang is among those to have been demolished by Chinese authorities. (Photo: YouTube)

A public toilet has been built on the site of a mosque in northwest China’s Xinjiang Uyghur Autonomous Region (XUAR).

The demolition of the mosque in Atush city was part of a campaign to dampen the spirit of Uyghur Muslims, reported Radio Free Asia (RFA) on Aug. 13.

The toilet construction on the site of Tokul mosque in Atush’s Suntagh village came after authorities had demolished many mosques in the region as part of a campaign known as “Mosque Rectification” that began in 2016 and targeted Muslim places of worship en masse, said RFA.

A Uyghur neighborhood committee chief from Suntagh told RFA that Tokul mosque was demolished in 2018 and in its place a lavatory was built by “Han [Chinese] comrades.”

“It’s a public toilet … they haven’t opened it yet, but it’s built,” he said.

Asked whether there had been a need for a public toilet, he said: “People have toilets at home, so there weren’t any problems like that.” The area sees few tourists, he added.

Another resident of Suntagh told RFA that two mosques in the village were demolished in 2019. Azna mosque was replaced by a convenience store that sells alcohol and cigarettes, which are frowned upon in Islam.

An official in Hotan city’s Ilchi township said a mosque site is slated for conversion into a garment factory to produce underwear.

An investigation by RFA into the Mosque Rectification campaign found that authorities had demolished nearly 70 percent of mosques in the XUAR region.

The radio service quoted another investigation by Agence France-Presse which revealed that at least 45 cemeteries in XUAR were destroyed from 2014 until October 2019. These sites were later converted into parks and parking lots.

Last year the Washington-based Uyghur Human Rights Project (UHRP) published a report, titled “Demolishing Faith: The Destruction and Desecration of Uyghurs Mosques and Shrines,” which stated that up to 15,000 mosques and shrines in the region were demolished from 2016 to 2019.

According to Qahar Barat, a Uyghur historian, desecration of sacred places is aimed at “spirit breaking.”

China is home to more than 22 million Muslims, including nearly 11 million Uyghurs.

In August 2018, a UN committee was informed that up to one million Uyghur Turkic Muslims had been detained in the Xinjiang region to attend "re-education" programs.

Human rights groups and Western governments have catalogued attacks, including forced sterilization, on Uyghur Muslims. China has denied the allegations.

China’s human rights abuses in Xinjiang provoked the US to impose sanctions on Chinese officials in July.