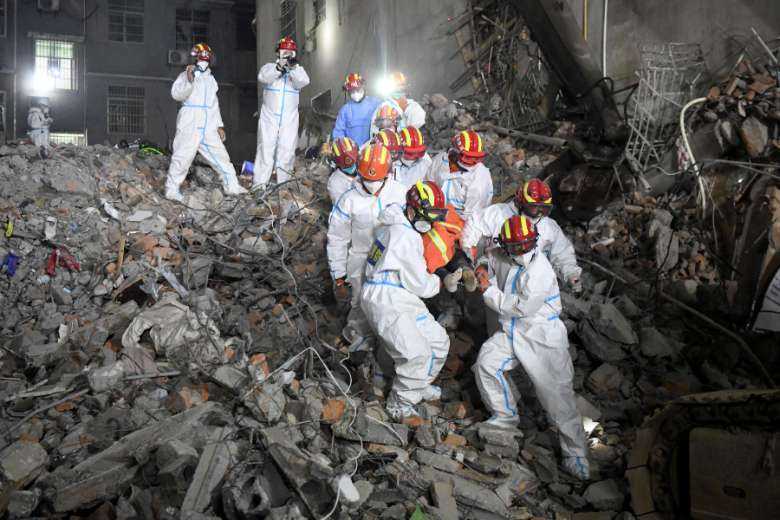 Rescuers carrying a survivor out of a collapsed six-storey building in Changsha in central China’s Hunan province on May 5. (Photo: AFP)

Fifty-three people died in a building collapse in central China, authorities said today, announcing the end of the rescue mission in a disaster which has been blamed on illegal construction.

The commercial building in Changsha city caved in last Friday, prompting over six days of painstaking attempts to pull survivors free from the mass of rubble and twisted metal.

"The search and rescue work at the Changsha building collapse site has been completed," state broadcaster CCTV quoted city officials as saying.

"The trapped and incommunicado people from the accident scene have all been found... ten people were rescued and 53 people died."

The tenth person pulled alive from the rubble just after midnight on Thursday had been buried in debris for nearly six days, state media reported earlier.

Local official Wu Guiying apologised for the accident during the briefing, mentioning her "extreme distress" and "unparalleled self-blame", as well as offering a "sincere apology to society".

The toll from the collapse rose from twenty-six as of Thursday evening.

The block had contained apartments, a hotel and a cinema. The flattened structure, which has left a gaping hole in a dense Changsha streetscape, created a mess of debris and crumbled concrete beams.

Another woman who survived around 88 hours in the debris told state media that she was studying on her bed at the time of the collapse and managed to stay alive by holding on to a small amount of water and using her quilt to keep warm.

Rescuers have been able to find live victims with the help of sniffer dogs, life detectors and drones, as well as shouting and knocking survivors, according to Xinhua.

Eleven people -- including the building's owner and a team of safety inspectors -- have been detained in connection with the collapse, including two people suspected of engaging in "illegal alteration" of the building, according to Changsha authorities.

Officials have alleged that surveyors falsified a safety audit of the building.

State media have identified the building as a "self-built residential structure", meaning built by individuals or companies with no state funding.

The Ministry of Housing and Urban-Rural Development on Sunday announced a safety inspection drive for "self-built housing" nationwide.

President Xi Jinping last week ordered a thorough investigation into the cause of the collapse, an indication of the severity of the disaster.

Building collapses are not uncommon in China due to weak safety and construction standards, as well as corruption among officials tasked with enforcement.