Two children walk down a street in Yarkand, in China's Xinjiang Uyghur Autonomous Region, in this June 24 photo. Chinese authorities have reportedly band the use of the Uyghur language in schools. (Photo by Johannes Eisele/AFP)

Authorities in China's Xinjiang region have banned the use of the Uyghur language in schools, official sources have said.

Those violating the order face "severe punishment," they said.

The ban is being seen as one of the strongest repressive measures yet imposed by Beijing to try and assimilate ethnic Muslim Uyghurs.
Donate to UCA News with a small contribution of your choice

The Education Department in Xinjiang's Hotan (in Chinese, Hetian) prefecture outlawed the use of Uyghur in schools, saying Mandarin Chinese should be spoken "in order to strengthen elementary and middle/high school bilingual education."

In the directive — a copy of which was obtained by Radio Free Asia — schools must "insist on fully popularizing the national common language and writing system according to law, and add the education of ethnic language under the bilingual education basic principle."

Mandarin Chinese "must be resolutely and fully implemented" for the three years of preschool, and "promoted" from the first years of elementary and middle school "in order to realize the full coverage of the common language and writing system education," the directive said.

It instructs schools to "resolutely correct the flawed method of providing Uyghur language training to Chinese language teachers" and "prohibit the use of Uyghur language, writing, signs and pictures in the educational system and on campuses."

Any school or individual that fails to enforce the new policy, will be designated "two-faced" and "severely punished," it said, using a term regularly applied by the government to Uyghurs who do not willingly follow such directives.

A Uyghur official with Hotan's Chira (Cele) county government said she had been informed about the order, but was not fully aware of its contents.
Related News 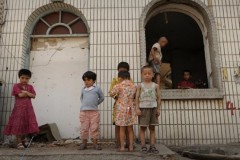