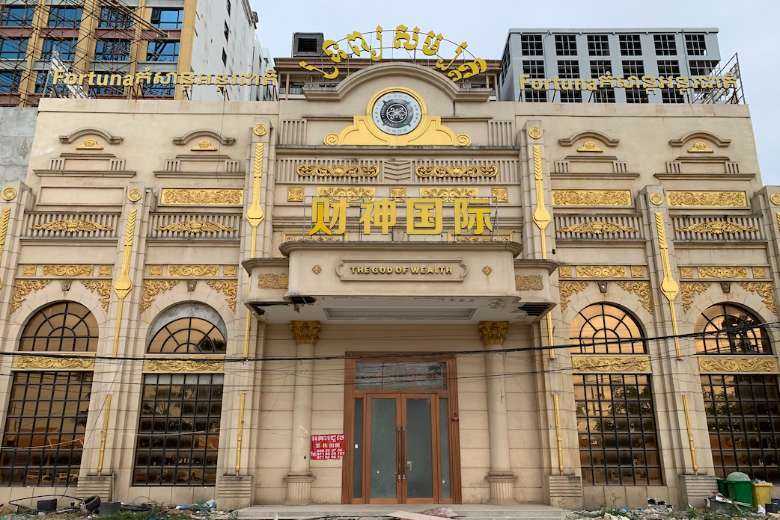 A derelict Chinese casino is abandoned in Sihanoukville. Hopes that the Chinese will return have been dashed by government warnings that its citizens are not to gamble in Cambodia. (Photo: Luke Hunt/UCA News)

The Chinese government has told its citizens not to gamble in Cambodia after multiple cases of violence were reported, with some resulting in death.

The warning could spell a major blow for the Cambodian economy, which has become heavily dependent on Chinese money.

“Looking at the recent vicious crime cases involving Chinese citizens [in Cambodia], many of those were led by gambling causes,” said a statement from the Chinese embassy in Phnom Penh quoted by the CNE news portal.

“The law enforcement units of China and Cambodia are jointly enhancing efforts to combat every online gambling and telecom fraud activity involving Chinese citizens in Cambodia.”

The embassy stated that mainland Chinese passport holders should not take part in gambling in the Southeast Asian nation and warned against online gambling companies trying to lure people to work in Cambodia.

The embassy said Chinese authorities would act against people involved in online gambling.

Much of the gambling is centered around the southern port city of Sihanoukville, which has been transformed into a Chinese enclave over recent years amid massive investment and attempts to transform what was once a quiet provincial town into a major metropolis.

However, those plans have fallen flat. In mid-2019, Cambodia stopped issuing new permits for online gambling services, which are being phased out.

The Covid-19 pandemic has also taken a toll, ending international tourism and halting the planned migration of millions of Chinese. By 2019, according to the government's own statistics, Chinese nationals living in Cambodia had more than doubled from a year earlier to 210,000.

Back then Chinese tourist arrivals had risen more than 70 percent year on year and were expected to reach 2.5 million annually by 2020 — in a country of just 15 million people.

Cambodian real estate agents were told that Chinese from the People’s Republic were expected to buy up to two million apartments over the coming years but Western embassy sources have said those numbers were much higher.

The result is row upon row of empty buildings and half-completed skyscrapers, deserted casinos and high unemployment among Khmers who relied on Chinese gamblers for jobs.

China’s Ministry of Culture and Tourism has also said it would add more overseas destinations to a blacklist of cross-border gambling. It did not name those countries but one observer here said: “You can bet Cambodia was on the list.”

The Philippines and Myanmar have also been cited as probable countries on the blacklist designed to stop “endangering the personal and property safety of Chinese citizens.”

However, Chinese have also been accused of causing trouble in Cambodia, particularly Chinese gangs who operate extortion rackets and money laundering.

For the six months to June 2018, Chinese topped the list of foreign nationals on Cambodian police charge sheets with 275 arrests. Nigerians were a distant second with 37, followed by Vietnamese, Thais and South Koreans.