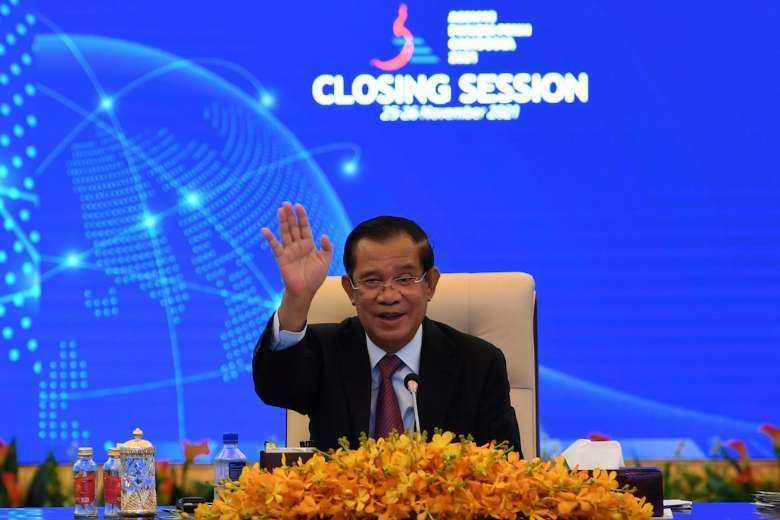 Cambodia's Prime Minister Hun Sen gestures during the closing session of the 13th Asia-Europe Meeting at the Peace Palace in Phnom Penh on Nov. 26. (Photo: AFP/National Television of Cambodia)

China will back attempts by Cambodia to produce its own Covid-19 vaccines by the end of next year.

The move will be supported by China National Pharmaceutical Group, makers of Sinopharm, the Chinese ambassador to Cambodia, Wang Wentian, said today.

The support follows a request from Cambodian Prime Minister Hun Sen and a swift rollout of the country’s vaccination program. More than 80 percent of Cambodians have been inoculated against Covid-19 with the daily official number of confirmed cases at less than 20, down from more than 1,000 a day.

“China pays close attention to the premier Hun Sen’s request on setting up Chinese vaccine-producing factories. Next year Cambodian people can use vaccines made in Cambodia,” Wang Wentian said in a statement.

Cambodia escaped the worst of the pandemic during its first year but then struggled with a lack of deep freeze facilities required to store vaccines. That issue has now been resolved.

Wang Yi said his country would maintain its commitment in helping Cambodia in the fight against Covid-19, including support to establish a Covid-19 vaccine-manufacturing factory in Cambodia.

Cambodia has reportedly spent almost US$250 million in acquiring about 30 million Covid-19 doses from China and has donated vaccines to its neighboring countries.

Vaccine diplomacy has emerged as a major issue between Indochinese countries with Cambodia outperforming Laos, Vietnam, Thailand and most of Asia in reaching herd immunity.

Hun Sen today recalled “the insult of a Vietnamese deputy defense minister, Hoang Xuan Chien” in March last year when he said if Vietnam did not restrict its border flow, it would receive a landslide of Covid-19 infections from Cambodia.

“Hun Sen get insulted, so we do our best to vaccinate approximately 89 percent of the kingdom’s total population. Are you sure that the disease was transmitted from Cambodia?” Hun Sen said.

“You have to consider whether you should apologize to the Cambodian people. I cannot accept such an insult. My people are now safe.”

In a separate statement, the Cambodian Ministry of Health announced it would lift entry bans for travelers from 10 countries in Africa or those who have a history of traveling to the 10 countries within the past three weeks, according to a dispatch from the government-friendly news portal Fresh News.