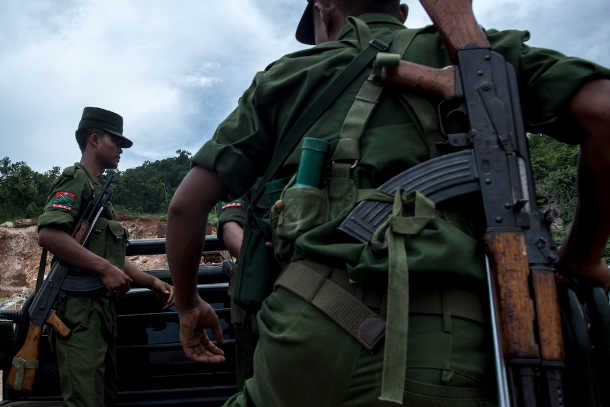 Members of the United Wa State Army (UWSA) are shown traveling in a convoy in the Poung Par Khem region near the Thai-Myanmar border in this June 26, 2017 file photo. The armed group, which has its own autonomous territories on the border, is thought to be one of the largest drug trafficking groups in Southeast Asia. (Photo by Ye Aung Thu/AFP)

On Nov. 2, All Souls' Day, Catholic nuns operating in Myanmar received an unexpected order to leave the Wa hills bordering China. It was part of a United Wa State Army (UWSA) clampdown on Christianity.

Local officials sealed off St. Paul's Catholic Church in Mong Pawk parish, and told a priest from Kengtung Diocese and three nuns from the Sisters of Charity to pack their belongings and leave the region.

Sister Assumpta Bu Ja said dozens of officials from the Wa army entered the church compound and ordered them to go.

"They told us the order came from the very top, and that we couldn't stay any longer," Sister Bu Ja recalled.

The 67-year-old nun has served in the Wa region since 2007. She said she had never previously received an expulsion order from the Wa army and was "shocked" by the news.

"I had no fear but I don't clearly understand why we were ordered to leave as we didn't do anything wrong," Sister Bu Ja told ucanews.com.

She added the nuns were doing good deeds for local communities, such as opening a nursery and boarding schools.

"We feel sorry for all the Catholics who came to see us after they heard the news," she said.

"However, we accept this as all being a part of God's plan, and we hope to be able to return to our mission at a later date."

Sister Bu Ja has since been assigned to work at St. Mary's Home for Disabled Children and Orphans in Kengtung, a town in Shan State.

The nuns tried to meet senior officials in the government to eke out a deal that would enable them to stay in the Wa hills, but claim they were undone by the language barrier, multiple levels of bureaucracy, and other obstacles. Sister Assumpta Bu Ja, a nun with the Sisters of Charity, was expelled from Myanmar's Wa hills by the United Wa State Army (UWSA) in November. The area borders China. Here she is pictured at St. Mary's Home for Disabled Children and Orphans in Kengtung town, in Myanmar's Shan State, on March 9. (ucanews.com photo)

Sister Assumpta Ah Mi said Wa officials confiscated her smartphone after she used it to take photos of them sealing off the mission's church. They also removed crosses and destroyed a statue of St. Paul, she said.

"They realized I was gathering evidence," she said.

The officials initially told them to find a new place in the region to settle, but later changed their tune and gave the sisters the boot, added the sister, an ethnic Akha who hails from a hill tribe that traces its roots back to China.

The sisters said the final order for them to leave had "a threatening tone."

"We were told to leave or be arrested," Sister Ah Mi told ucanews.com.

Several trucks were stationed outside the church compound to escort them away, with dozens of soldiers standing guard, she said.

"I saw some local Catholics crying as we left," she noted.

Wa officials also destroyed a Marian grotto in Mong Pawk parish, according to the expelled nuns.

Since 2006, the nuns have run a boarding school there for around 100 students from the Lahu and Wa ethnic communities. They added a nursery school last year.

There are an estimated 3,000 Catholics in ethnic Lahu and Kachin villages in Mong Pawk parish.

From late September to mid-October, three Salesian priests, eight nuns from the Missionary Society of St. Paul, and nine lay teachers were expelled by the UWSA, an offshoot of the Communist Party of Burma (Myanmar).

The Lahu Baptist Convention claims 52 churches have been closed in Mong Pawk township, with three totally destroyed. A Bible studies school has also been sealed off and 41 students forcibly recruited into the Wa army.

China is believed to be pressuring the UWSA to detain more pastors.

The UWSA has declared all churches built after 1992 illegal and vowed to destroy them. Only those built between during a tiny, three-year window between 1989 and 1992 are deemed legal and valid.

The local army has banned the construction of new churches, and requires that priests and church employees all be local people.

It has also banned religious teaching in schools in the Wa region, while UWSA functionaries have been forbidden to serve as members of any religious organization.

The UWSA leadership has also pledged to punish any local administration cadres who are found to be supporting missionary activities.

The 30,000-strong UWSA — Myanmar's largest ethnic army — is understood to also be one of the major drug-trafficking groups in the Southeast Asian region.

It will celebrate the 30th anniversary of a truce with the government in April, and has invited government officials including State Counselor Aung San Suu Kyi and diplomats to attend the commemorative function.