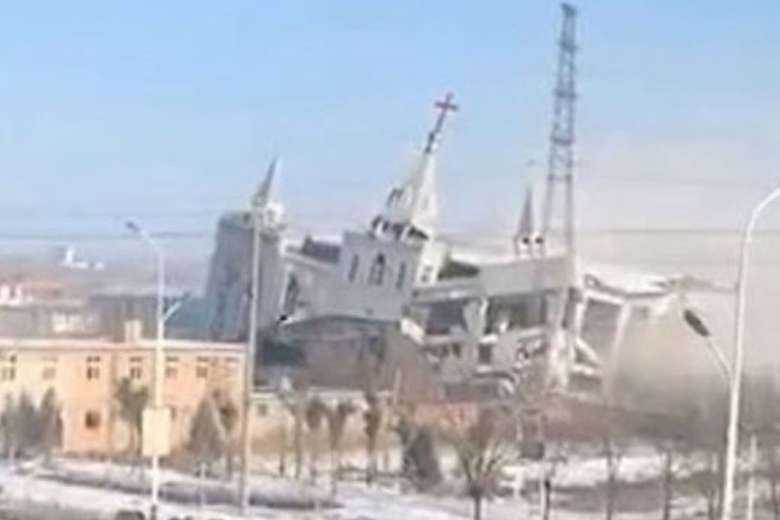 This screengrab shows footage of the demolition of the Golden Lampstand Church in Linfen city in Shanxi province on Jan. 9, 2018. (Photo supplied)

Authorities in China have arrested leaders and members of a prominent evangelical church that was destroyed with dynamite about three years ago, sparking a global outcry.

Nine leaders and members of the Golden Lampstand Church, a house church in Linfen in Shanxi province, northern China, were arrested on Aug. 7 in a “well-prepared and coordinated” public security operation, reported Bitter Winter, a magazine on religious liberty and human rights.

Among the detainees were Pastor Wang Xiaoguang and Evangelist Yang Rongli. Both had previously been arrested in 2009.

Before it was demolished with explosives by local authorities in January 2018, the Golden Lampstand Church was a megachurch and one of the largest churches in China.

Its congregation was part of a network of 50,000 members and the church was constructed at an estimated cost of US$2.6 million, according to Bitter Winter.

It was the second destruction of a church in China in one month after a Catholic church was destroyed in the neighboring province of Shaanxi, about 20 years after it was opened, The Guardian reported.

The destruction of the churches is viewed as part of a fresh crackdown on Christians in the officially atheist country as the Chinese Communist Party (CCP) enforces highly repressive new regulations on religious affairs.

Observers and rights groups say the repressive measures aim to dismantle Protestant and Evangelical churches that refuse to join the state-approved Three-Self Church. The underground Catholic Church that pledges allegiance to the Vatican and global church has also faced renewed crackdowns.

The Golden Lampstand Church was one of numerous Protestant and Evangelical family and house churches in China, some of them reportedly with millions of members. These churches are also known as Sola Fide (Latin for “faith only”) churches that refuse to join state-controlled organizations.

Although these churches are not listed among Xie Jiao, a group of 20 cults or belief groups labeled “anti-China” or “evil cults" by the CCP, they still face oppression.

Golden Lampstand Church leaders and members have faced arrest and jailing since 2009.

Despite the painful destruction of their beautiful place of worship in 2018, members of the Golden Lampstand Church network continued to gather and pray indoors and in public, triggering further crackdowns and arrests of church leaders and members.

A policy of Sinicizing religion has been implemented across the country as the CCP relies strongly on Chinese cultural identity to stay in power and limits whatever it perceives as a threat to its control of society, Open Doors reported.

Sinicization aims to impose strict rules on societies and institutions based on the core values of socialism, autonomy and supporting the CCP leadership.