An "anti-extremism" piece of legislation aimed at Muslim ethnic Uyghurs in China's far west is now effective, marking another milestone of increasing restrictions upon this ethnic minority.

Taking two years to draft and pass, the regulation that the Xinjiang Uyghur Autonomous Region "desperately needs" will normalize work to "eliminate extremism" and ensure such activities can be handled in accordance with the law, said Nayim Yessen, director of the standing committee of the regional legislature, according to state-run media China Daily.

Qin Wei, director of the regional legislature's legislative affairs commission, said the legislation defines extremism for the first time in China. Extremism uses "radical religious beliefs to interfere with the way how people normally speak and act," said Qin in a press conference on March 30.

There are 15 types of "extremism" according to the Chinese government. Examples include using religious — instead of legal — procedures to marry or divorce, wearing an "abnormal" beard, bans on veils, following Halal or using it to intervene in other people's secular lives.

Similar bans had before been applied on an ad hoc basis in the province, which is home to some 10 million Uyghurs.

Shih Chien-yu, a professor at the Journalism School of Chu Hai College in Hong Kong, told ucanews.com that the purpose of the law is to establish accepted norms for both Muslims and non-Muslims.

"But if the Muslim community perceives the legal regulations unfair to them and their doubts are not clarified, it will bring more confusion in governance," said Shih, an expert on Xinjiang and Muslim affairs.

The new law is filled with "prohibitions not based on criminology or anti-terrorism studies that emphasize the psychological awareness of the suspects. It is rather de-radicalizing extremism through reconstructing people's behavioral values, social network and lifestyle," said Shih.

The Chinese Communist Party has been on an offensive in the province since 2009 when sectarian riots killed almost 200 people in the Xinjiang capital Urumqi and during 2014 and 2015 there was an increase in terror attacks with hundreds killed and injured by Uyghurs in other major Chinese cities.

The push is in line with the officially atheist Party sharpening its focus on religion and religious groups — especially Christianity and Islam after a landmark speech by President Xi Jinping. China cracks down on Xinjiang Christians 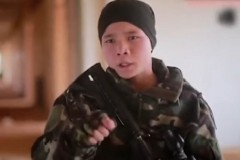