Rights monitors say the crackdown has led to curbs on religious freedom, uptick in Uyghur executions 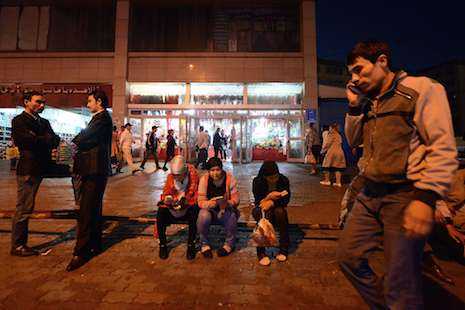 Chinese authorities have busted 115 terrorist cells in restive Xinjiang during the past six months, state media reported on Tuesday, part of a crackdown on Islamic separatist violence that has led to unprecedented restrictions on minority Muslim Uyghurs.

Halfway through a one-year “strike hard” campaign in Xinjiang that the state-run China Daily said was “stopping most terrorist attacks”, authorities have shut down 171 “religious training sites” and arrested 238 people.

Xinjiang authorities have opened 44 cases of people training in the use of explosives over the internet and 294 cases in which violent footage was distributed, it added, without giving further details.

Meanwhile, more than 18,000 documents, 2,600 DVDs and 777 computer memory sticks “related to religious extremism” have been seized in Xinjiang over the past six months.

President Xi Jinping announced the campaign using “extremely tough measures and extraordinary methods” on May 23, the day after Uyghur separatists ploughed into the main market in Urumqi, the capital of Xinjiang, leaving 44 people dead as they lobbed explosives. It was the third deadly attack by suspected Uyghur separatists in a two month period.

In response, Beijing poured extra police and security personnel into Xinjiang, China’s largest region where an estimated 12 million minority Muslim Uyghurs live, many of them in remote areas near China’s borders with Afghanistan and Pakistan.

The government’s campaign has seen the return of mass trials in China for the first time since the 1990s and has coincided with a surge in death sentences and executions of Uyghurs — nearly 40 people have been sentenced to death and at least 20 executed since May.

William Nee, a China researcher at Amnesty International, said that Chinese legal reforms had led to improvements in recent years but this year’s campaign in Xinjiang was bucking the trend.

“You do have people who are committing acts of violence against innocent civilians. That’s not to dismiss the government’s need to care about security,” he said. “But from a human rights point of view it has been a very troubling campaign.”

Rights groups including Amnesty say it remains unclear whether Uyghurs charged on terrorism and separatism related charges are permitted basic legal rights including defense counsel. Chinese lawyers say they have been denied the right to defend Uyghurs in such cases.

Earlier this month, a mass trial in the mainly Uyghur city of Kashgar resulted in 22 people convicted on charges including disturbing public order and “illegal preaching” with prison sentences of up to 16 years.

During the past six months, China’s state-run media has reported that religious teaching to under-18s has effectively been banned as Islamic schools have been closed.

Around Kashgar, principals at more than 2,000 kindergartens signed a pledge last month to “defend schools against the infiltration of religion” while discouraging Islamic teachings at home, according to the Global Times, which is close to the Communist Party.

Children under 18 have also been banned from entering mosques, and there were reportedly increased restrictions on people trying to observe Ramadan this year.

“They are going after unlawful religious practices but what they define as lawful is very tightly controlled by the state,” said Nee.

State media this week pointed to the success of the government’s pre-emptive campaign against the related “evils” of separatism, religious extremism and terrorism”.

Although China saw a slowdown in terrorist attacks directly after the campaign started, in the past four months at least 168 people — including alleged terrorists, police and civilians — have died in violent attacks blamed on Uyghur separatists.

China suffered its most deadly terrorist incident in years when violence in remote Shache County in late July left 96 people dead, according to state media, with overseas Uyghur groups claiming the toll was much higher.

The government has paired its harsh anti-terrorism campaign with plans for major economic development in a bid to quell discontent in one of China’s poorest regions by spending billions of dollars creating a new ‘Silk Road’ of cross-border trade and investment in Xinjiang.

Jiang Zhaoyang, an ethnic affairs expert in Beijing, said that the government needed to find a better balance between economic development and harsh punishment if it hoped to reverse the cycle of violence.

“Actions should be taken delicately,” he said. “Extremist thought and general discontent should be carefully distinguished, and this ‘strike-hard’ campaign should be more precisely targeted.”