Catholics are encouraged to adhere to the 'one direction, one road and one flag' principles of the Chinese Communist Party 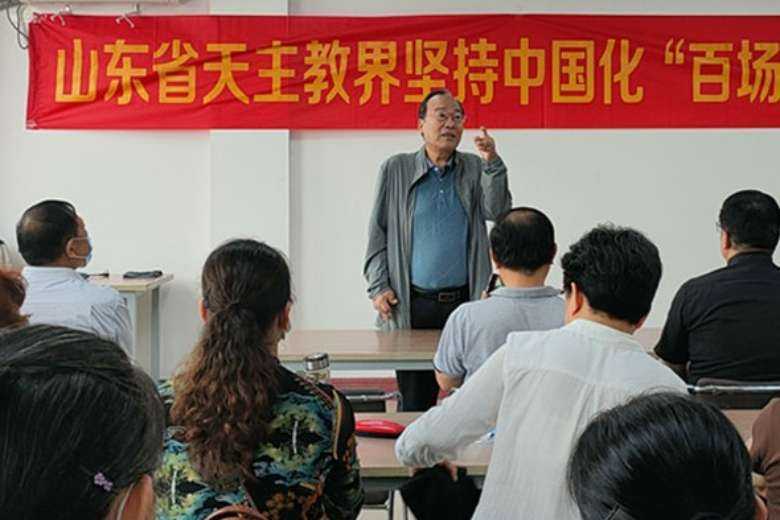 Catholic Church members and priests attend a 'Hundred Sermons' event focusing on the Sinicization of Catholicism in Zibo city in Shandong province of China on Sept. 24. (Photo: chinacatholic.cn)

China’s communist government is seemingly accelerating the process of Sinicization of the Catholic Church to implement in spirit and action the policies of the Chinese Communist Party (CCP) put forth by President Xi Jinping.

Two recent events in Shandong and Hebei provinces organized by the state-controlled Bishops' Conference of the Catholic Church in China (BCCCC) and Chinese Catholic Patriotic Association (CCPA) highlighted the willingness of church leaders to put the CCP’s Sinicization policy into practice.

However, in reality, Sinicization is based on a profoundly political ideology that aims to impose strict rules on societies and institutions based on the core values of socialism, autonomy and supporting the leadership of the CCP.

On Sept. 24, Catholics from two churches in Zibo city in Shandong province attended an event called “Hundred Sermons” that sought to explain the instructions of President Xi on religious activities, promotion of Sinicization in the Church and how to adapt to the socialist society, according to a report on the BCCCC website.

Some 30 church members and priests attended the program at the Zhangdian Church in Zibo where Bishop Joseph Yang Yongqiang, a Vatican-approved bishop and vice-chairman of the BCCCC, delivered a speech.

Father Wang Yutong, deputy director and secretary-general of the Zibo Catholic Patriotic Association, made a presentation titled "Personal Experience of the Sinicization of the Church” based on his 30 years of experience in parish management, evangelism and daily activities through the association.

The priest concluded his speech by calling for Chinese Catholicism to carry on the legacies of pioneering leaders like Bishop Zong Huaide and follow the principles of “one direction, one road, one flag” — to adhere to the Sinicization of religion, the path of independence and a self-run church, and the flag of patriotism and love for religion.

The presentation garnered applause from the audience. Bishop Yang praised Father Wang for the inspirational speech and urged church members and priests to adhere to “one direction, one road and one flag” principles.

The educational visit was based on the theme "Take the Red Footprints and Inherit the Red Spirit" that intended to cultivate feelings of love for the Chinese Communist Party, patriotism and socialism as part of the Sinicization of Catholicism.

Xibaipo village is considered a sacred site for the CCP as it was once the seat of the party's Central Committee from where Mao Zedong, the founding father of communist China, led three major battles in Liaoshen, Huaihai and Pingjin against nationalist forces.

The CCPA delegation visited former sites of the Central Committee, the United Front Work Department, Second Plenary Session of the Seventh Central Committee of the CCP, and the Central Military Commission. They also visited the war room used by communist revolutionaries such as Mao Zedong, Zhu De and Zhou Enlai, and the Xibaipo Memorial Hall.

A guide accompanied the group, who also watched historical exhibitions while carefully listening to heroic deeds of the revolutionary martyrs and their great achievements leading to “the birth of New China.”

The group also visited Catholic organizations in Hebei including the Catholic Theological Seminary, Xinde Charity Foundation and Xinde Society and had a meeting with Bishop Franics An Shuxin of Baoding as well as exchange meetings with priests and parishioners.

China is officially an atheist republic but it recognizes the legal entity of five religions — Catholicism, Protestantism, Buddhism, Islam and Taoism. For years, the authorities have strictly controlled state-sanctioned religious groups and persecuted those adhering to unregistered and unrecognized groups such as the Church of Almighty God, Falun Gong and even underground Catholics who refuse to join state-approved bodies or pledge allegiance to the CCP.