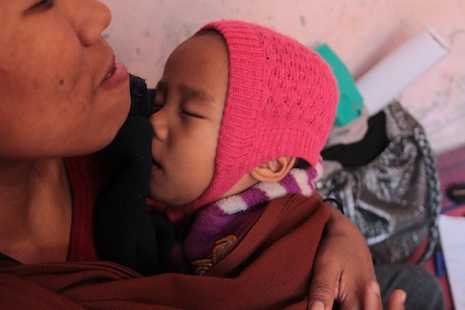 Most women don’t want to talk about it. After all, there is nothing to talk about. “Yes, men touch us,” “Men grab us when we walk to the market,” “Men tell us we owe them our bodies for coming to their country.” For the single women in New Delhi’s Chin community, harassment is part of their daily lives since reaching India.

Women seeking refuge in New Delhi have few outlets to report sexual harassment and assault without language skills, resources or knowledge of their rights and legal status. There are currently 20,000 refugees in the city, 12,000 of them from Chin State, the poorest region in Burma.

Jesuit Refugee Service began working in the Chin community in 2011, providing tailoring training to women, many of whom are single. These women earn about 2,800 rupees ($55 US) per month in tailoring factories, and JRS hopes they can earn a living tailoring from home with new sewing machines and skills.

This is not only an issue of income generation but of safety. Without enough money to go to the market, most women in this community forage for food after midnight, when the outdoor markets have closed and unwanted vegetables have been discounted or discarded. Some go in groups for protection, but it doesn’t always help.

“Delhi is not safe for women. We always get sexually harassed. Local teens brush against us and harass us in little ways. People steal from us. I need to go to the market to get discarded vegetables after 11 pm, but I know I’m risking getting sexually harassed by local men,” said Elizabeth (not her real name), a single mother who now earns money knitting baby clothes on a machine rented from Don Bosco, an NGO funded by the UN refugee agency (UNHCR).

After the December rape and murder of a 23-year-old physiotherapy student in Delhi, and more recently the rape and torture of a five-year-old girl last week, the city has seen dozens of mass protests over lack of police protection and sensitivity toward rape.

The 23-year-old student was gang raped by five men on a Delhi minibus and died after undergoing emergency treatment in Singapore for brain and gastrointestinal damage. The five-year-old is still under medical care at a health center in Delhi.

There are no statistics on sexual violence against refugee women in India, and the national crime rates are skewed because these crimes often go unreported.

The public outcry has at least paved the way for legislation to reinstate India’s fast-track court for rapists. In March, the Indian parliament further approved the death penalty for rape that leads to the death of the victim, and for repeat offenders.

Still, with so few women reporting sex crimes most criminals will never be brought to court.

“This is an issue that affects every women in Delhi,” said Rini, a volunteer with Burmese Women’s Development (BWD).

“Indian women get groped all the time. I’m Indian, so at least I can talk back to the guy or go to the police. But refugee women can’t talk to the police. If they do, the police don’t listen and they feel more marginalised.”

In a 2012 investigation of 30 police officers – the first point of contact for a rape victim – 17 of them blamed the victim.

“Girls from Darjeeling and Nepal have come here for business purposes. They go with men for money. Later, when the money is not sufficient, it becomes a rape,” said Try Rajpal Yadav, a senior house officer, in the hidden camera investigation.

With accusations like these, it’s no wonder that the staff of BWD, run by Burmese refugees, say they hear more about sexual abuse in their neighborhood on the outskirts of Delhi than the police.

Sawmte, the finance officer for BWD, said there are only so many times a single woman can ask male friends to accompany her to the market.

“If a man tried to defend us, it just gets more local men to join in and causes more violence,” she said.

Margaret (not her real name) fled Chin State when she was 17, crossing the border to India’s Mizoram state where more than 110,000 Chin people live.

She came to New Delhi because it is the only city in India where asylum seekers who are not Tibetan or Tamil can register with UNHCR and receive some semblance of legal protection.

Now she says Delhi is too dangerous and she and her friend, both now 21, want to return to Mizoram and work on a farm until it is safe to return to Myanmar.

They will earn substantially less money, but they say they will have a safe community and know their neighbours.

“I truly thought it would be safer here than in Burma. Now I don’t know,” Margaret said.

A version of this article has appeared here on the Jesuit Refugee Service website. Molly Mullen is a JRS international communications consultant.