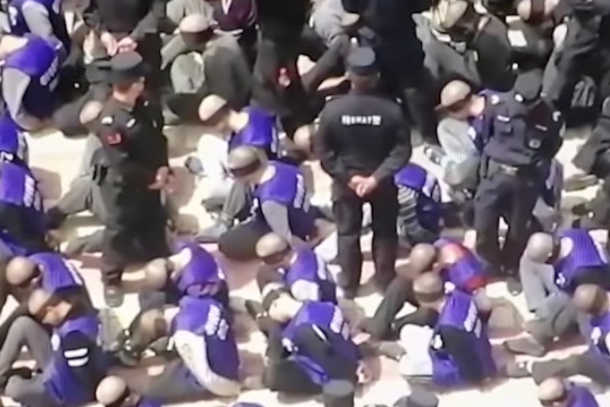 Politicians and members of the Uyghur community have condemned a "chilling" video that shows hundreds of blindfolded and shackled Uyghur men being led from a train in the Xinjiang region of northwest China.

The drone footage shows men wearing blue and yellow uniforms, with cleanly shaven heads and their eyes covered, sitting in rows on the ground and being led away by police.

China’s anti-terrorism campaign in Xinjiang has led to the extrajudicial detention of more than one million ethnic Uyghurs and other Muslim minorities in internment and political re-education camps.

Alim Osman, president of the Uyghur Association of Victoria, said it was "sad and heartbreaking" for the community in Australia to see such videos circulating.

"It's chilling and it's very horrifying for us. We feel like we are alone in this battle against the Chinese communist regime," he told the ABC.

"We in Australia feel powerless and we feel guilty because we can't do anything about it. It feels like exactly the same as what happened in Nazi Germany — it's happening in the 21st century again.

"It's time for the international community, especially our government, to speak out against what's happening in Xinjiang. If we don't speak out at this time of history, I think the Chinese communist regime is going to do more harm than good to us and to humanity."

Uyghurs in Xinjiang are subjected to torture, forced labor, organ harvesting, sterilization, separation from their children and cultural and religious repression, ucanews.com reported in March.

The video, posted to YouTube last week by War on Fear, has been verified as authentic by Nathan Ruser, a satellite analyst at the Australian Strategic Policy Institute.

He used clues in the drone footage, including landmarks and the position of the sun, to verify the video, which he believes was shot at a train station west of Korla in southeast Xinjiang in August 2018.

"They [Chinese authorities] take journalists and diplomats on very guided, very manicured tours around the region, to particular camps to highlight what they call progress and human rights in the region,” Ruser told the ABC.

"However, this video undercuts that narrative and shows clearly the very inhumane treatment that detained individuals get in the system, in the crackdown that started in 2017 in western China."

Watch the video published online by War on Fear here:

Australian Foreign Minister Marise Payne described the video as "deeply disturbing" and said she had previously raised Australia's concerns about reports of mass detentions of Uyghurs and other Muslim peoples in Xinjiang.

China maintains its treatment of the Turkic-speaking Muslim minority is necessary to counter terrorism and extremism. It has repeatedly denied its detention facilities are "concentration camps" and claims they equate to boarding schools and vocational training centers.

In a press briefing on Sept. 23, China's Foreign Ministry spokesman Geng Shuang was not questioned directly about the video but responded to the United States' criticism of China's actions in Xinjiang.

"The U.S. has tried to smear and vilify China's policy in Xinjiang time and again in a gross attempt to interfere in China's internal affairs," Geng said.

"Facts can prove that these measures have produced visible outcomes. Xinjiang now enjoys social stability, sound economic momentum and harmony between ethnic groups. It has not seen a single terrorist attack in the past three years.

"These measures are no different in nature from the deradicalization and preventive counter-terrorism measures taken by many other countries."