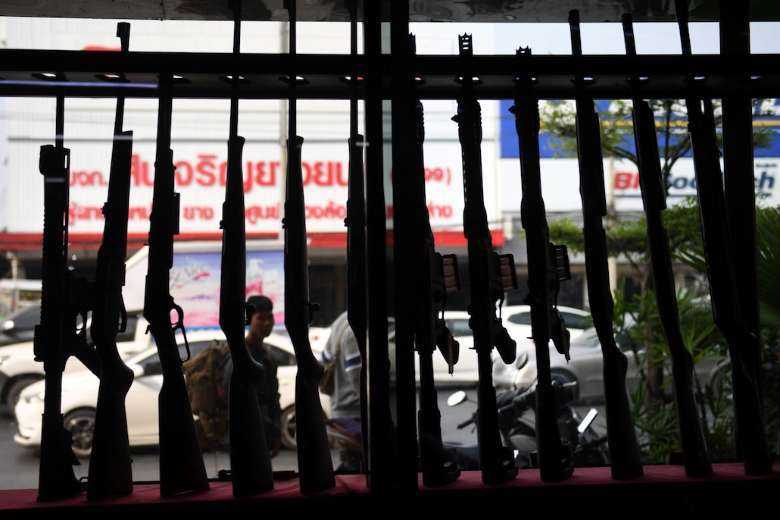 Guns are set up in a window display at the Ratchasima Gun Shop, located near a shopping mall where a mass shooting took place in the northeastern Thai city of Nakhon Ratchasima in February 2020 when a rogue soldier shot dead 29 people. (Photo: AFP)

The death of a five-year-old girl in Thailand while at play with a shotgun has highlighted gun safety issues in a country that has the highest rate of gun violence in Southeast Asia.

The girl died earlier this week from wounds she suffered while playing with a loaded shotgun with two boys, aged six and seven, at a village chief’s house in the central Thai province of Kanchanaburi.

The child was severely wounded in both legs when the shotgun discharged and died of excessive blood loss before she could be taken to hospital.

Although the village chief had a license to own the gun, police said, the firearm had been left unsecured and within reach of the children.

“This is certainly criminal negligence. Horrible,” a Thai woman noted in an online comment, echoing a similar sentiment expressed in the wake of the tragedy.

“Criminal negligence — a village headman leaving a loaded shotgun lying about in a room where children were left to play,” added another commenter.

In my village many people have guns to protect themselves. Otherwise, it can be dangerous if you get into an argument with another villager

“This one is on the village chief. Poor adult supervision at that house as he knew what was in that room,” a third commenter explained. “And why a loaded gun when a shotgun shell can be kept separately?”

The death of the child is the latest in a seemingly endless series of injuries and deaths caused by firearms in Thailand, whose rate of gun violence per capita exceeds the rate in the United States.

According to a study by experts at the University of Washington, there were 4.45 deaths by shooting per 100,000 people in Thailand in 2016, which was more than the average annual rate of gun-related deaths per 100,000 in the United States, a country known for high rates of gun violence.

There are over 6 million registered firearms in private hands in Thailand with millions more held illegally in a nation of 69 million, according to experts.

Gun ownership is especially common in some rural areas where many local men carry forearms to defend themselves should disputes with someone escalate to the point of violence.

“In my village many people have guns to protect themselves. Otherwise, it can be dangerous if you get into an argument with another villager,” Suwisa Sukchuang, a native of Nakhon Sri Thammarat, a southern province notorious for gun violence, told UCA News.

Exacerbating matters is that despite the Buddhist faith placing an emphasis on self-control, many local Buddhists have hair-trigger tempers, which can flare up into deadly violence in an instant.

“Sometimes we get into a conflict and guns seem to be the answer. Guns make people equal,” Naras Savestanan, a prominent police officer, noted.

In addition to violence committed with guns, firearms also claim victims accidentally when they are handled or stored in an unsafe manner as happened to the children in Kanchanaburi.

Gun safety advocates have been calling for tougher measures on firearms ownership in Thailand, but such calls have so far resulted in little tangible action.

Guns remain easy to obtain both legally and illegally in a country where firearms can even be purchased illegally with relative ease online, according to experts.

At the same time, many gun owners have had little or no training in how to handle and store their lethal weapons properly.