Children use art to protest martial law in Mindanao

Art sessions are held as part of the Philippines' weeklong observance of the U.N. Universal Children’s Day. 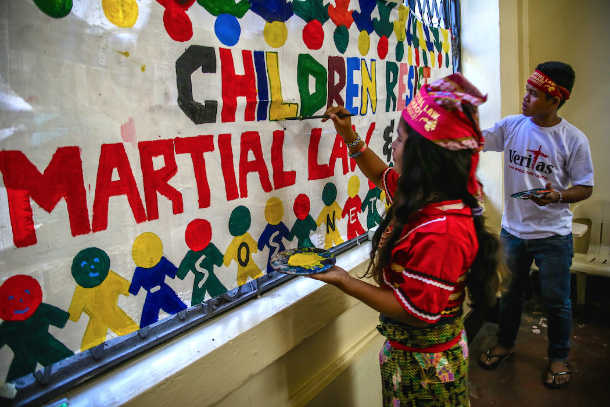 Children from Mindanao villages participate in art sessions in Manila to mark the observance of the United Nations' Universal Children's Day. (Photo by Mark Saludes)

Children from the southern Philippines expressed their opposition to martial law in Mindanao through drawings and paintings in an art workshop in Manila on Nov. 15.

A group of 25 children from villages in the south joined art sessions to mark the first day of the weeklong observance the United Nations' Universal Children's Day.

He said children are the "most vulnerable victims" of the armed conflict and the declaration of martial law in Mindanao following the fighting in the city of Marawi last year.

"They have been suffering because of poverty and government neglect," said Bonganay, adding that the experience was aggravated by abuses and threats against tribal schools.

The group Save Our Schools (SOS) Network claimed it has documented 535 attacks on tribal schools affecting 2,460 schoolchildren and teachers in the past year.

"Students and teachers from 10 schools were displaced because of military operations while 30 schools were used as military camps and barracks," said Rius Valle, spokesman of SOS Network.

On May 23, 2017, President Rodrigo Duterte declared martial law across Mindanao after terrorist gunmen attacked the city of Marawi, resulting in a five-month siege.

Bishop Felixberto Calang of the Philippine Independent Church said the government should consider the immediate lifting of martial law.

The prelate said women and children suffer the most during conflict. "Martial law will not resolve the roots of armed conflict," he said.

Human rights groups are set to hold a Children's Day Festival on Nov. 20 to forge the "broadest unity" of children, youth, and advocates in support for children affected by martial law in Mindanao.

The United Nations' Universal Children's Day was established on Nov. 20, 1954, to promote awareness on children's rights and welfare.

In 1989, the U.N. General Assembly adopted the Declaration of the Rights of the Child, which the Philippines ratified in 1990.

The Philippine Congress has passed 33 laws and six development frameworks concerning the welfare of Filipino children.