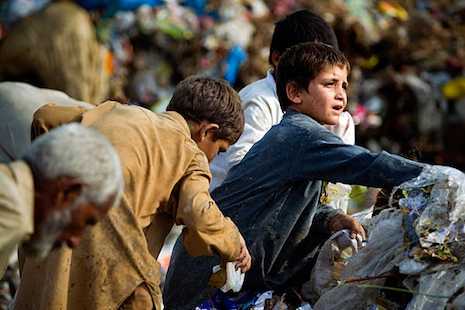 The world has become much less peaceful since 2008 – 5 percent less so, to use the exacting numbers of those who calculate them. And a large share of this burden falls on the world’s most vulnerable group: children.

While some countries, such as Kazakhstan and India, have improved their war-to-peace ratios – another 110 nations have seen these rankings drop according to the 2013 Global Peace Index (GPI) report. That's not proving healthy for the youngest of the young in these places.

The problem for kids extends past just exposure to war and violence. Many children around the world face abuse and deprivation on a daily basis, often at the hands of those they rely on for food and shelter. Threats continue to range from various forms of slavery to sexual exploitation and hunger.

A report published yesterday by the International Labor Organization (ILO), for example, highlights the widespread use of child labor in domestic settings. An estimated 10.5 million child laborers, almost half under 14, are used for domestic work the report states.

While many children are abducted or forced into servitude, in many cases parents simply send their children to work in someone’s home, often using child brokers who have misled the family about working conditions and educational opportunities.

Child domestic laborers are particularly difficult to protect because they remain largely unseen. They are brokered off and hidden in their employers’ homes where they are exposed to grim conditions and maltreatment. As the ILO report states:

“Their situation, and how they got to be there, … makes them highly dependent on their employers for their basic needs. This seclusion and dependency makes child domestic workers particularly vulnerable to child [labor], and at times can result in physical, psychological and sexual violence.”

But domestic child labor makes up just one small part of the world's estimated 215 million children involved in questionable work. Much of the abusive labor is seen in factories or mines and involves risks and long hours, to name just some of the hazards. A Human Rights Watch press release on child labor in Ghana’s gold mining industry finds that “a third of Ghana’s children between the ages of 5 and 14 are working.”

Another recent report by United Nations General Secretary Ban Ki-Moon examines children suffering in war. In Syria, thousands of children have been killed over the course of the long and bloody civil war that has been raging there since 2011.

According General Secretary Ban, the Syrian government has used children as shields during combat. Others have been tortured, raped, and interrogated for presumed affiliation with rebel forces. Moreover, armed forces in Syria are accused of attacking schools or using them for military purposes.

“We’ve documented attacks on schools, teachers, and students in at least 24 countries with conflict in the past seven years,” says Zama Coursen-Neff, the executive director of the children's rights division of Human Rights Watch. “The more we start examining [attacks on schools], the more we find it.”

Rather than serving as safe havens, schools come to represent terror and trauma to these children, many of whom refuse to return to them. “The long-term consequences, post-conflict, are huge,” says Ms. Coursen-Neff.

Mali was also in the UN report for abuses of children, including for the use of child soldiers. The conflict in north Mali between the government and Islamic extremists – some with ties to Al Qaeda – has come at a high cost to children as a forthcoming report by the Watchlist on Children and Armed Conflict points out.

Children, who constitute more than half of Mali's population, were frequently collateral damage in attacks and older children are reportedly recruited or abducted into armed units, according to the Watchlist report:

“Residents in [Gao, Kidal, and Timbuktu] repeatedly said that they saw children barely as tall as their guns – AK 47s – with uniforms so big that the sleeves hung off; children so small that they couldn’t carry their guns and had to drag them.”

The conflict has also witnessed a spike in sexual violence, including rape and forced marriage. While difficult to discern exact figures due to lack of documentation, reports, and stories from friends and families of victims reveal the prevalence of rape by rebel fighters against girls. Many times, girls will be abducted, raped, and then returned the next day by those exploiting the current state of instability.

Numerous young Malian girls are being forced into marriages under threat of violence, or by their parents who are seduced by the offer of a dowry. Many of these marriages take place as a result of rape and subsequent pregnancy. This poses risk to young girls, as they “may experience serious health complications, in addition to psychological impacts associated with shame and rejection within their communities.”

Though children face these iniquities, there are efforts being made by actors, ranging from grassroots NGOs to large international organizations, to protect children and prevent their exploitation and suffering.

The ILO has passed a number of conventions and recommendations regarding the protection of children and child laborers. Since their adoption, several countries have strengthened their child labor laws, including Brazil, India, Thailand, and Vietnam.

And crimes against children do not go unnoticed or unpunished. The UN has been using a monitoring and reporting mechanism (MRM) to gather evidence of crimes against children for the Security Council, which uses this information to take action against the offending parties. “It’s not a perfect mechanism,” says Coursen-Neff, “but it has seen real results.”

“It is quite a powerful message, for parties to be added to an official UN list of shame.”