Children get to grips with climate change 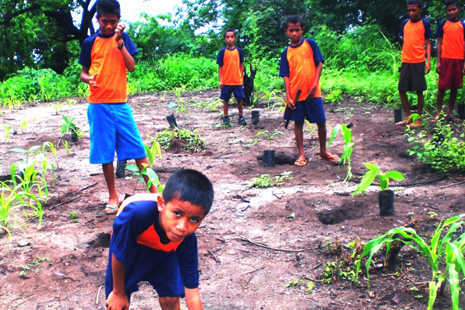 Church and state-run schools in Larantuka diocese, East Nusa Tenggara province, are taking their own steps to tackle the impact of climate change and global warming. The local forest authority warned some while ago that Flores Island, an area of great natural beauty to the east of the province, could turn into a desert if no green action is taken. These worries were echoed by environmentalists at the Social Research and Development Foundation (YPPS), who responded by launching an initiative aimed at local people, including school children and teachers. The initiative is entitled Building Resilience, a joint project with Oxfam. Involving children from nine elementary schools and a junior high school, it covers about 10 villages that have been identified as natural disaster-prone areas, at risk from fire, flood, landslides, volcanic eruptions and abrasions. Since the 2009 launch, more than 2,000 children have helped to plant thousands of mahogany and jackfruit trees, as well as bamboo and many other plants, all with the goal of greening the eastern tip of Flores Island and reducing the impact of climate change. The YPPS team also shows videos on environmental issues and takes the children on field trips to raise their awareness. Building Resilience project manager Anselmus Atasoge said, “After watching the videos and going on the field trip, the children are asked to share what they have heard and seen. It is hoped that they carry home the message to their parents.” Exposing the children to deforested hills, dried savannas, flooded terrain and coastal erosion “really inspires the kids to plant trees together,” he added. “The involvement of school children in the reforestation drive will help the environment of East Flores in the long run,” said YPPS facilitator Romanus Wato. “Their role is vital in improving the quality of the environment, which has degraded significantly.” Markus Malaka Witi, a teacher at Lewatobi Catholic Elementary School,  said motivating children to plant trees is a great strategy. “The children should know about the conditions of our environment and what causes its degradation. Understanding what endangers nature will help them develop their love for it,” he said. With the encouragement of the central government, regional education authorities are playing their part too, by working to include local environmental matters in the curriculum for elementary and junior high schools. “If children are exposed to them from a young age, I am sure the country will not have so many environmental problems in the future,” said Ignasius Hadjon, the local representative for the Ministry of Education and Culture.