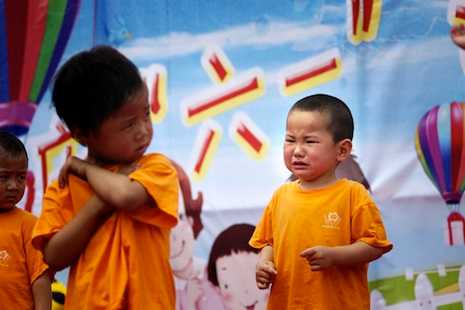 In today's China, there might be around 150 million migrant workers: people who have left the place of their household registration and are working in cities for varying lengths of time.

The numbers remain a matter of debate and wide fluctuation. Migrant workers' situations vary tremendously, from being soundly established in urban life to living in a state of utmost precariousness.

But what remains undisputed is the severity of the social, emotional and educational cost paid by migrant workers' children.

There are two distinct categories: children who have migrated with their parents, and children left behind in the original family home. The number who have migrated is difficult to estimate, although it has probably reached 20 million.

But whether these migrant children were born in their current city of residence, or have been there five years or more, or are newly arrived, they remain second class citizens and face a series of institutional barriers to school and healthcare, as well as social discrimination.

However, their overall situation may be improving, as their fate has been a public concern for years, and administrative discriminations are being removed step by step, at varying speeds depending on the city.

The children left behind in the countryside have drawn less attention, even though they are more numerous. The Ministry of Education stated in 2011 that there are 22 million children in this category, yet the estimated figure in a 2008 report by the All-China Women's Federation was nearer 58 million, or one in five of the total number of rural children.

A recent study trip to rural parts of Sichuan made me acutely conscious of these childrens’ situations and the psychological price they pay. We visited seven children, aged seven to 11. Only one of them lived with his foster parents. Four were living with both grandparents, one with her grandmother alone, one with her grandfather.

None of them, we discovered, had seen their parents for a year or more. Isolation and alienation are an inevitable result. In several cases, the grandparents were trying to encourage the children to phone their parents, but the children were refusing to do so.

We were struck by the dignity and resilience of the grandparents -- Sichuanese peasants who had already had their share of hardships in life, now faced with the most unexpected of them all, losing their children to the lure of city money, and now having to start again with a new generation.

The migrant parents are also among the victims. China’s economic boom has created expectations to which they were not psychologically ready to respond in any sustainable way. Countless marital relationships have been shattered by the conditions imposed upon them for staying in the urban job market.

The real concern and the sound assessment of the situation expressed by the teachers who guided us was a source of comfort. So was the development of local volunteers' associations who are now trying to deal with the plight of rural women and children.

They bear testimony to the building up of China's civil society, gradual though it may be. Today's China is more equipped than before for dealing with the social and psychological traumas that its developmental model has created.

Nevertheless, the extent to which children are paying the price of social imbalance needs to be more openly recognized and prioritized. The future of China lies in its children, and a very large number of them are collateral victims in the drive to prosperity.

Benoit Vermander lives in Shanghai and teaches philosophy and religious anthropology at the University of Fudan.