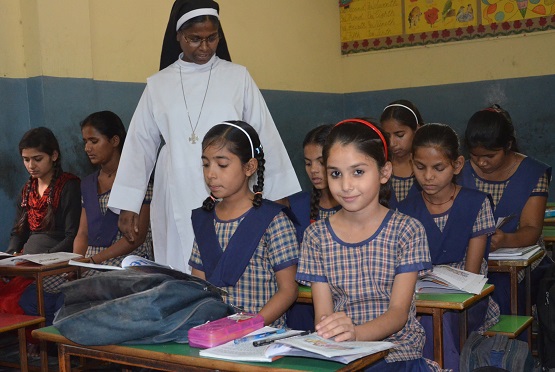 Sister Jaya Peter supervises children studying in one of the classes. (Photo by Ritu Sharma)

Share this article :
Dharmendra Ahrawat wants to be a doctor. But for a child laborer, this dream would seem impossible to achieve. The 13-year-old boy, who lost his father three years back, seems to have no other option but to go out to work and earn some money. "My mother is a daily wager and sister a domestic worker but that is not enough so I had to start working," Ahrawat, who washes cars every morning, told ucanews.com. He earns 900 rupees (US$13) per month to support his family but "I want to stop this work and do something dignified once I grow up." The same goes for 11-year-old Saniya (goes by one name), who along with her mother makes paper bags and wanders from shop to shop selling them which brings in about 200 rupees per day. Eldest of the five children, Saniya said her father is a daily wager and she has no choice but to help her mother earn a decent meal once a day. Ahrawat and Saniya are among the hundreds of children in the slums of Ghaziabad district in the northern Indian state of Uttar Pradesh working as child laborers. The children do various jobs like making bangles, paper bags, domestic work, repairing bikes, stitching or selling vegetables. Burdened with the responsibilities of earning money and taking care of their families, these children till a few years ago had nobody to look up to. Now they have Sister Jaya Peter, who has worked for their welfare since 2011. Sister Peter, who belongs to the Congregation of Mother of Carmel, says it’s her mission to educate these children and give some direction to their lives. "Six informal schools have been running in different slums in the area since 1999, but they have not yielded any positive results despite a good amount being paid to the teachers," she said. The nun said she wanted to bring these children under one roof. "I asked our superior general if I could use the classrooms at St. Theresa Convent School run by the congregation in nearby Sarvodaya Nagar, in the evenings."     The congregation supported the nun but the difficult part was to convince the parents of the children who thought it beyond their means to send their children to such a good school with all the facilities. "I spoke with parents in the different slums for around four months and told them that everything will be totally free," the nun said, adding that the classes start after the regular school day ends. The school that started with 155 slum children now has 478 pupils with a staff of 10 teachers. Of the 478 slum children, about 30 percent are child laborers. "We have 1-10 classes where tests are regularly conducted, progress reports given and parents-teachers meetings held," Sister Peter said, adding that this system has had a very positive impact on the children as some are now shy to admit they work as child laborers. The nun said she does not want to discourage these children from working because their earnings contribute a significant part to the family income without which many families would struggle to survive. "Nobody wants to do such jobs at such a tender age but it is the circumstances that make them do them," she said. "My aim is to give these children a basic education. ... I have even helped some do a nursing course after their basic education was completed and they are earning decent money now," she said. Sister Peter said the children are given food before they attend classes because sometimes "it is their first meal of the day and I wanted to give them a little incentive to come to school." Apart from education, Sister Peter also gives vocational training to youths in the slums. "We have three rooms at the school reserved for such activities. There are 30 people with us doing tailoring and beautician courses," she added. Slum children study in class. (Photo by Ritu Sharma)   Other Church agencies working to combat child labor    The Office of Labor of the Catholic Bishops' Conference of India in collaboration with BREAD, a Catholic organization working for the welfare of children, has been analyzing government laws for the protection of child. "Government laws against child labor are not implemented properly. Merely saying that a child should not work is not the solution to the problem," Father Jaison Vadassery, secretary of the labor office, told ucanews.com. The priest said the root cause of the problem — poverty in the family — should be eliminated if "we do not want child labor in this country." He said 94 percent of India's population works in the unorganized sector and it is the children who are most vulnerable and end up scavenging, doing domestic work or begging. Father Vadassery said that they would be spreading awareness within society about the issue and ways to tackle it. "We are also trying to reserve space in Catholic institutions across the country to for these children to give them the chance of a better future," he added.  Everyone needs to do more to stamp out child labor in India, he said.