Child suicides on the rise in Bangladesh 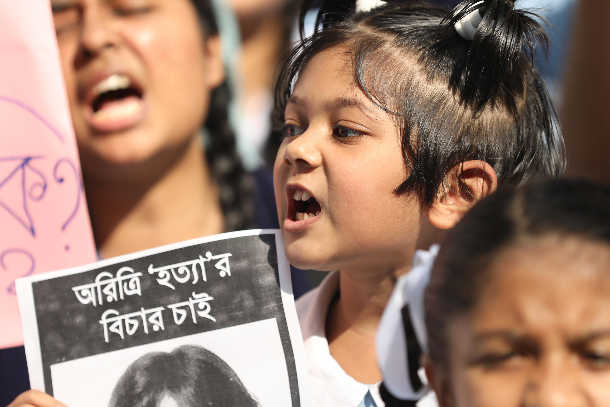 Students of Viqarunnisa Noon School and College in Dhaka on Dec. 5 chant slogans for justice for ninth-grader Aritry Adhikary, who committed suicide on Dec. 3 after she and her parents were allegedly humiliated. (ucanews.com photo)

A lack of awareness among families and teachers as well as inadequate facilities for mental health care of children are behind an alarming rise in child suicides in Bangladesh, health experts and child rights activists say.

This was up from 213 child suicides and 11 attempted suicides by minors in 2017, according to the Bangladesh Child Rights Forum, which is a national coalition.

Children die by suicide following incidents that include getting poor grades, being rebuked by parents or being bullied or insulted by others, Abdus Shahid Mahmood, director of the forum, told The Daily Star newspaper on Dec. 6.

"Not everyone has the same ability to absorb mental pressure," he said.

Many who do not take their own lives, or try to do so, still suffer long-term emotional and psychological damage from mistreatment or neglect.

Child abuses including rape and killings have made headlines in Bangladesh in recent years and sparked public outrage.

The issue of child suicides again came to the fore in Bangladesh with the Dec. 3 suicide of a student from a top girls' school in capital Dhaka.

Aritry Adhikary, a Hindu ninth-grade student at Viqarunnisa Noon School and College (VNSC), committed suicide by hanging herself after she and her parents were allegedly humiliated by college authorities.

Aritry was removed from the school during an examination after she was alleged to have been caught with a mobile phone in a hallway a day before.

The girl and her parents admitted there had been a breach of the rules but asked for mercy. College authorities refused to relent.

Aritry was barred from appearing for the rest of her exams and threatened with being permanently dismissed from the school.

She ran away from the school, leaving her parents behind, and hanged herself at home in her room.

The death shocked VNSC students and they held street protests demanding justice. Some branded the death as a murder.

The government said it would take punitive action against the college.

The governing body of VNSC on Dec. 5 suspended three teachers, including acting principal Nazneen Ferdous, who were accused of wrongdoing in the police complaint.

Meanwhile, the Education Ministry has formed a committee headed by the minister, Nurul Islam, to probe the events that led to the suicide.

"Adolescence is a critical period of life and emotional overflow is common in most children," Dr. Helaluddin Ahmed, associate professor at the state-run National Institute of Mental Health, told ucanews.com.

"This is how children grow up and march to maturity. Whether in the family, the school or anywhere else, they need to be treated with care."

A lack of awareness leads to tragedies, she added.

"Sometimes parents and teachers put children under immense pressure to get good grades, which become unbearable for them," Dr. Ahmed warned. "They find death is the solution, or freedom, which is very sad."

Dr. Edward Pallab Rozario, secretary of the Catholic Bishops' Commission for Healthcare, said the real level of child and teenage suicides must be much higher than the official figures.

Many cases went unreported as parents and family members hushed up deaths to hide their own failures, save face and avoid a social backlash, Dr. Rozario told ucanews.com.

"There is not just a lack of facilities for counselling of children in schools but also a serious lack of awareness among people for mental well being of children," he added. "This is a serious issue and we must face it head on."