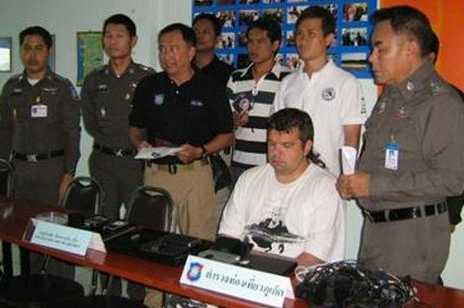 A Ukrainian man who fought extradition for three years from his Thai jail cell has been sentenced to 30 years in prison for running a network of websites that catered to paedophiles around the world.

Authorities believe Maksym Shynkarenko, now 35, was "the most significant distributor of child pornography ever prosecuted in the US".

He was arrested in Phuket while on vacation. While he apparently was not involved in paedophile offences during the brief time between his arrival and his arrest in 2009, authorities say he was using proceeds from his paedophile network and money laundering schemes.

The sentence passed by US District Judge William Walls on Tuesday was part of a plea deal reached by the Shynkarenko in early January - almost five years after his arrest in Thailand and 18 months after his extradition to the US. He will likely be deported when he is released from prison.

"You have pleaded guilty to one of the most serious crimes imaginable in our culture as human beings," Judge Walls told Shynkarenko at the sentencing. "I can't think of anything more horrific."

"I want to just say I regret my crime, and I am grateful for the chance to change my life," he said.

That chance will come in a high-security prison, where he will be kept mostly isolated from the rest of the prison population because of the nature of his crime.

After Shynkarenko finally lost his three-year battle against extradition at the Bangkok Criminal Court in January, 2012, US authorities unsealed the indictment of specific charges.

It said he traded in tens of thousands of hardcore pornographic images and videos that depicted children, ranging from infants and toddlers to teenagers being graphically sexually assaulted or abused, in most cases by adults. He and associates still at large, presumably in the Ukraine, advertised the websites with names such as "Illegal.CP," "The Sick Child Room" and "Hottest Childporn Garden."

The indictment described statements on the website such as, "Even if you ever have problems with police, you can always say that someone had stolen the information from your credit card and used it. It is very difficult to establish that you were the person to pay."

Authorities say Shynkarenko, 33, was able to operate with virtual impunity out of the Ukraine, long a leading source of child pornography, because of the country's lax law enforcement against paedophiles, as well as its rampant political corruption.

The poor economy was a contributor, as well. Food or candy reportedly was often good enough to get a child to participate in the production of hardcore photos or videos. Some material was even sold openly on the street.

Shynkarenko's arrest was made with great local fanfare by Phuket police Jan 23, 2009. Tourist Police Commander Attakrit Thaneechat and Phuket Provincial Police Commander Apirak Hongtong held a press conference, where they produced the Ukrainian, in a white shirt and a hangdog look.

Shynkarenko was arrested at his rented village in Chalong, Phuket. Officers of two US agencies went along to observe, as guests of the police. He was detained under a warrant from the Criminal Court, issued on Jan 21. Shortly after his arrest, he was transferred to the Bangkok Remand Prison to arrange extradition.

Though it was not divulged how much money Shynkarenko made from the websites, the US attorney's office said he was charging $79.99 (about 2,400 baht at the time) for a 20-day subscription. Authorities seized a subscriber list that numbered in the thousands.