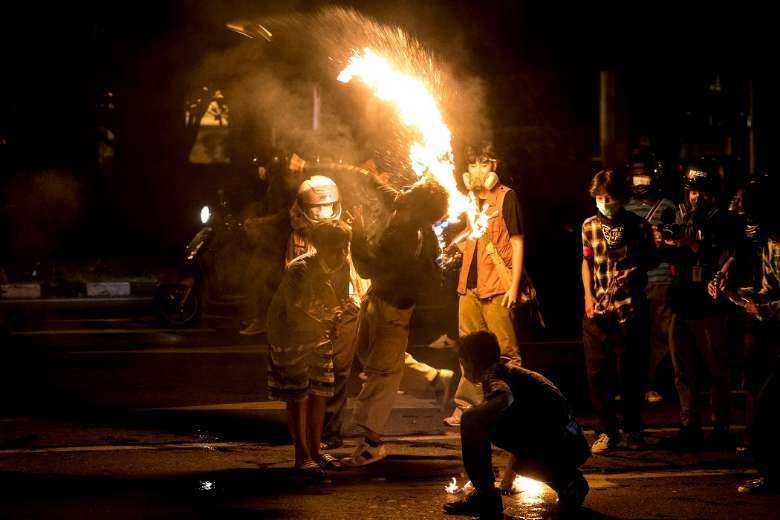 A protester launches a flaming projectile towards police during a demonstration calling for political reforms and the resignation of Thailand's Prime Minister Prayut Chan-O-Cha over the government's handling of the Covid-19 coronavirus crisis in Bangkok on Sept 12. (Photo: AFP)

A Thai police crackdown on young pro-democracy protesters has raised concerns about alleged child abuse after a 12-year-old boy was detained in Bangkok on Sept 13.

The boy was arrested along with at least 11 other people during a street protest at a major intersection in the Thai capital, according to rights group Thai Lawyers for Human Rights.

The 12-year-old was riding his bicycle to check out an ongoing street protest at the site when police stopped him, detained him, and charged him with violating a curfew that prohibits people in the city from being outdoors between 9pm and 4am as part of Covid-19 mitigation measures.

Thai Lawyers for Human Rights said he is the youngest person to have been charged with a crime during frequent youth-led street protests that have seen high school, college and university students pitted against police officers in riot gear for weeks.

Among the others arrested on Sept. 13 were two freelance journalists and a medic, all of whom have also been charged with violating the curfew.

Since student-led street protests began in earnest in July last year, Thai authorities have been taking an increasingly hardline stance against protesters, most of whom are in their teens and early twenties.

Scores of young Thais, including several minors, have been detained and charged with various crimes from sedition to royal defamation over the past year.

If convicted, they could face decades in prison as royal defamation alone, a crime, also known as lèse majesté, that carries a prison sentence of up to 15 years per count.

International human rights experts have raised concerns about the Thai authorities’ decision to charge minors with various crimes for taking part in street protests during which participants have called for democratic reforms in a country ruled by a military-allied government, which seized power in a coup in 2014 before holding elections in 2019.

After a 16-year-old student was charged last December with royal defamation for allegedly making critical comments about Thailand’s royal family, the United Nations Human Rights Committee said it had grave concerns about the use of the lèse majesté law in Thailand against protesters, especially minors.

“We are deeply troubled by the move by Thai authorities to charge at least 35 protesters in recent weeks, including a 16-year old student protester, under Article 112 — the lèse majesté provision of Thailand’s criminal code,” the UN’s rights body said in a statement.

“We are particularly alarmed that the 16-year-old protester was yesterday presented by police to the Juvenile Court with a request for a detention order,” Ravina Shamdasani, the committee’s spokeswoman, noted at the time.

Shamdasani urged Thailand’s military-allied government to stop persecuting pro-democracy activists by charging them with crimes such as lèse majesté.

“We call on the government of Thailand to stop the repeated use of such serious criminal charges against individuals for exercising their rights to freedom of expression and peaceful assembly,” she said.

“We also urge the government to amend the lèse majesté law and bring it into line with Article 19 of the ICCPR [International Covenant on Civil and Political Rights] on the right to freedom of expression,” she added.

However, such concerns voiced by UN experts and other rights advocates have gone unheeded by Thai authorities, who have since charged numerous other young Thais, including other minors, with royal defamation and other crimes.