Protecting the image of the church has led prelates and priests to remain silent, cold and uncaring toward victims Protesters hold placards outside the Royal Commission into Institutional Responses to Child Sexual Abuse in Sydney in February 2016. (Photo by William West/AFP)

We live in a new age of freedom of expression where a long history of suppression and cover-ups is breaking down and social and mainstream media are championing the voices of child sexual abuse victims.

The power and influence of some leaders of traditional institutions like the Catholic Church to instil fear, bury the realities, deny child abuse crimes and silence the complainants are being challenged and their credibility weakened.

Abused women are speaking out and children too are bringing criminal cases against their abusers. It is an age of truth telling and there is more justice for victims and survivors thanks to the mandatory reporting of child abuse in the church and in the government.

What was once hidden, denied and covered up by deceit, threats and lies is coming out. Bishops and priests speaking against it and fighting this evil are few, but nevertheless there is strong action by many religious superiors and some bishops against abusive priests, although few are ever brought to trial.

The public is slowly realizing the extent of these heinous crimes against children. The perpetrators are often their biological parents, step-parents or partners, grandparents, siblings, neighbors and clergy.

Child abusers are not monsters hiding in alleyways and snatching children. Child abusers are found among ordinary people in most professions: doctors, dentists, sports coaches, teachers, swimming instructors, the religious and clergy.

There are pedophiles all around us. Justice is replacing lies and shame, telling the truth does set some of the children free. Today, all churches are being challenged and held to account.

Despite the revelations and the new growing levels of awareness, what we see is just the tip of the iceberg. Most cases never come to light. One in every four children is a victim of sexual abuse, according to survivor groups.

Protecting the image of the institutional church has been their first priority and has led bishops, archbishops and priests to remain silent and cold and uncaring toward victims. They have lost credibility.

The evidence of denial, cover-up and transferring priests from place to place has been the undoing of the church hierarchy in many countries. Many bishops have resigned. 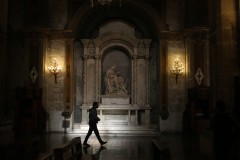 Pope Francis has said that child abuse by priests is "an absolute monstrosity, a terrible sin that contradicts everything that the church teaches."

In Ireland, the United States, Australia and most recently Chile, widespread child abuse in the church has been uncovered.

In Chile, 34 bishops offered Pope Francis their resignations after widespread child sexual abuse by clergy where the bishops either ignored it or covered it up. Some fed wrong information to Pope Francis himself during his recent visit to Chile.

The pope denounced the allegations against Bishop Barros, saying there was no evidence when in fact there was. Survivors had sent him a personal letter describing the abuse they suffered from priests.

Francis later apologized and asked forgiveness of the victims and sent his investigator Archbishop Charles Scicluna to Chile to find out the truth and then invited the survivors to Rome where he asked them to forgive him for his mistake.

The Chilean bishops had made greater mistakes. They confessed. "We, all the bishops present in Rome, have tendered our resignation to the Holy Father so that he may decide freely for each of us," the bishops admitted after Pope Francis had serious discussions with them at the Vatican.

"We want to ask forgiveness for the pain caused to the victims, to the Pope, to God's people and to our country for the grave errors and omissions we have committed."

Some church leaders have ignored the teaching of Jesus in Matthew 18. Jesus proclaimed that the most important in the Kingdom of God is a child, unless we become as innocent as a child we will not enter into the Kingdom and whoever accepts the child accepts him. He added that they who abuse a child causing that child to lose faith in Jesus should face severe punishment.

Many thousands of good, honest virtuous laity, victims, survivors and clergy have stood by their faith in Jesus of Nazareth despite the child abuse scandals that have rocked the institutional church to its foundations.

Trust in some church leaders as the once unassailable teachers of morality has been tarnished.

In Ireland, the majority voted recently to repeal the anti-abortion provision in the constitution ignoring the moral stand of the institutional church. Many priests have been tried and convicted for abusing children in different countries. They consider themselves Catholics but are not always Christian.

Archbishop Wilson in Australia is facing a possible jail sentence and Australian Cardinal George Pell is on trial facing allegations of child abuse and covering it up.

Pope Francis said: "We will counter those priests who betrayed their calling with the most strenuous measures. This also applies to the bishops and cardinals who protected these priests — as happened repeatedly in the past."

Despite the shame, millions of good Catholics hold on to their faith in the universal Gospel values.

In the Philippines, Cardinal Luis Antonio Tagle of Manila has said that child-abusing priests are dealt with internally by the church's canonical process and are not reported to the civil authorities.

It appears that priests accused of child molestation are moved from place to place and can abuse with impunity and are above the law. It is presumed that an amicable settlement in cash is made to the parents of the child victims.

This is now considered criminal behavior and it is what has brought shame and disaster to the institutional church in several countries and made it a target for its critics.

Child abusers must be reported to the authorities and children must be assisted to file formal complaints.

Francis, who meets with survivors regularly, said child abuse by priests and cover-ups by bishops are "a great humiliation. It shows not just our fragility but also — let's say this clearly — our level of hypocrisy."

Irish Father Shay Cullen, SSC, established the Preda Foundation in Olongapo City in the Philippines in 1974 to promote human rights and the rights of children, especially victims of sexual abuse.