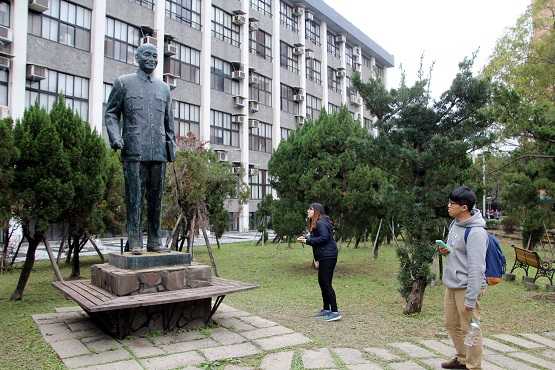 The damaged Chiang Kai-shek statue at Fu Jen Catholic University on March 1 in New Taipei. The walking stick on the right hand of the statue has been sawed off and saw marks are visible on the two legs. (ucanews.com photo)

In what has become a trend among Taiwanese malcontents, an image of Chiang Kai-shek, the former president, was vandalized by students from a Catholic university who blame him for years of terror and abuse.

Four students at the Fu Jen Catholic University in New Taipei were arrested after a gang of 10 were on Feb. 28 caught vandalizing a bronze statue of Chiang Kai-shek, president of Taiwan 1948-1975.

The incident happened on the 70th anniversary of the so-called 228 Incident when the ruling Chinese Nationalist Party launched a crackdown against civilian demonstrations massacring tens of thousands. It marked the beginning of the White Terror era that lasted until 1991, during which even more Taiwanese people were arrested, imprisoned and executed.

The students clashed with police officers who came to stop them from pulling the statue down. Police arrested two students from Fu Jen University, one from Kaohsiung University and a 34-year-old woman.

Since the school decided not to sue the vandals, the public prosecutor charged them with obstructing public duties.

A school statement on Feb. 28 said that the school administration respects the students' stance but does not allow anyone to illegally destroy school property. The school will set up a committee to discuss how to handle the vandalizing of the statue, it added.

Chiang Kai-shek's statue has long been a controversial topic in Taiwan as some regarded him as a symbol of authoritarianism and hold him responsible for the 228 Incident. Vandalizing his statues and portraits has become a common act of rebellion in recent years, especially around the anniversary of the massacre.

His statue in the Fu Jen campus was also vandalized on Jan. 10 when its face was covered with cement and strewn with banners calling for the "removal of the colonial butcher." In 2014, three students posted stickers on it calling for the statue's removal.

A graduate student from Fu Jen, who spoke on condition of anonymity, told ucanews.com that the vandals may not be aware that the statue was not erected to symbolize the authority of Chiang Kai-shek. "It is to memorialize the contribution of Chiang Kai-shek and his wife Madame Soong Mei-ling, former chairperson of the university's board of directors, in the establishment of the university," he said.

Fu Jen Catholic University, first started by Benedictine Fathers in Beijing, was founded in Beijing in 1925 but closed down in 1952 after Chinese Communists took control of the country. Seven years later, Pope John XXIII assigned then Archbishop Yu Pin of Nanjing, who became a cardinal in 1969, to reopen the university in Taipei. Fu Jen has some 26,000 students.