Young people in Timor-Leste were urged to learn from the sacrifices of the freedom fighters on the 30th anniversary of the Santa Cruz massacre on Nov. 12.

The tragedy in which more than 200 people died after being shot by the Indonesian military during the country's struggle for independence in 1991 is remembered somberly but also as National Youth Day.

President Francisco Guterres called on young people to "continue to keep the spirit of the youth victims of the massacre" and not to forget the heroes who fought selflessly and shed blood for the country's independence.

"We can do all things right now, but we must not forget them, those who gave their bodies and blood so that we who are alive today have life," he said.

"Through their sacrifices, we can now be free, we can get democracy, we can achieve independence."

A Mass was held at the Church of St. Anthony Motael in Dili, not far from the Santa Cruz cemetery where the tragedy occurred. It was attended by the families of the victims, youths, religious leaders and state officials.

Hard work, tolerance, discipline are the values left behind by the heroes. In their hearts, there is a spirit of nationalism, patriotism

Parish priest Father Nelson da Costa Freitas called on young people to learn from the heroes who died in the tragedy.

Young people should “expect nothing in return” while contributing to solving the country's problems, just as the victims of the tragedy who died so that Timor-Leste could enjoy freedom, he said.

Gregorio Sinha, chairman of the main event’s committee, said: “Hard work, tolerance, discipline are the values left behind by the heroes. In their hearts, there is a spirit of nationalism, patriotism. That's what we want the new generation to live for.”

Social activities including free medical services for the families of the victims were organized by youth groups during the week preceding the event. 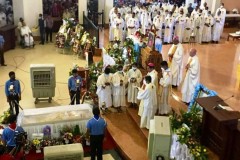 The Santa Cruz massacre was a tragic turning point in Timor-Leste's struggle for independence from Indonesia. The incident occurred when more than 2,000 people went to the Santa Cruz cemetery to pay homage to young activist Sebastião Gomes, who was killed a few days earlier.

The Indonesian military opened fire, killing 74 people, most of them young, on the spot. More than 120 died later in hospital or due to persecution by the occupying forces.

The massacre was filmed by journalist Max Stahl and drew international attention to Timor-Leste.

Stahl, who died on Oct. 28 in Australia and whose services continue to be remembered by East Timorese during the anniversary of the massacre, was awarded the country's highest Order of Timor-Leste award in 2019.