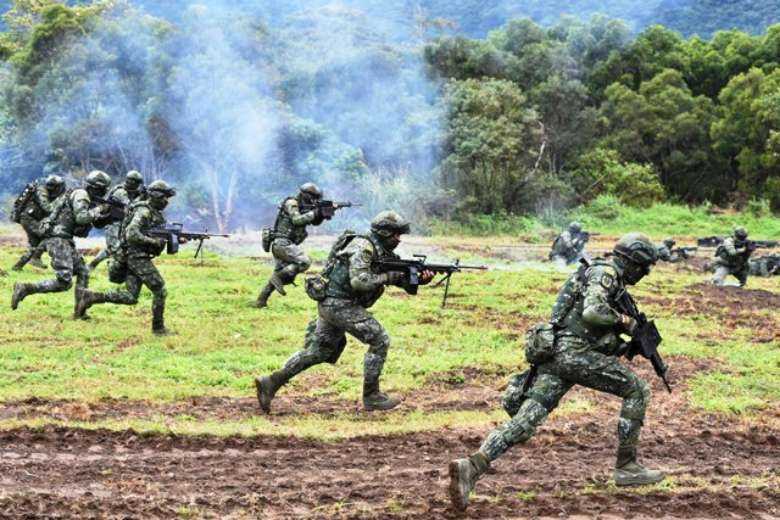 Taiwanese soldiers stage an attack during an annual drill at a military base in the eastern city of Hualien in January 2018. Self-ruled Taiwan has lived under the threat of a Chinese invasion since the two sides split at the end of a civil war in 1949. (Photo: AFP)

As Beijing continues to put pressure on Taiwan to reunify with mainland China, tension is mounting in the region. This challenges the Vatican’s bilateral relations with Taiwan and with communist China, where it has been working out an operational understanding without having any formal diplomatic ties.

Of the 15 nations that recognize Taiwan, the Vatican is the most crucial as it remains the only European land to have such a link with the self-ruled island. The Holy See and China's communist government have inched closer with the 2018 pact on appointing bishops. Their bonhomie has Taiwan worried. Is China planning a bloodless coup across the Taiwan Strait?

Though Pope Francis described the secret deal at the time as “not political but pastoral,” for Taiwan the not-yet-published Vatican-China pact goes much beyond the appointment of bishops. Taiwan sees it as a path for the Vatican to have diplomatic ties with China, which refuses to have ties with countries recognizing Taiwan.

The stakes are very high for the Vatican in mainland China. With the secret pact, it got breathing space and managed to get a say in the affairs of the 12 million Catholics among the Asian country's 1.4 billion people after five decades.

Now the national church in China and its bishops are considered in communion with the Catholic Church — no mean achievement going by Vatican norms.

It was not a cakewalk for the Chinese national church before the pact. Catholics were divided into the patriotic church and the underground church, which refuses to accept the leadership of the state.

The bishops of the Vatican-appointed underground church and their followers were persecuted for their faith and allegiance to the pope. They were spied on, their churches were destroyed and priests were placed under house arrest, beaten and made to disappear.

Though communists suppressed all unfriendly institutions and beliefs to the godless doctrine after coming to power in 1949, the regime failed miserably when it came to the Catholic Church. The underground church managed to thrive in the communist country with tacit support from the Vatican.

Relations have improved considerably between the two since 2018 after the Chinese government recognized some of the bishops of the underground church and began appointing new bishops in consultation with the Vatican. Neither the Vatican nor China has appointed any bishop independently in the past three years.

Diplomatic circles see the newfound love between the Vatican and Beijing as a hint of possible substantial shift that may see the Vatican establishing a permanent diplomatic mission in Beijing.

The Chinese government has been successful in steadily reducing the list of nations that formally recognize Taiwan from 32 in 2000 to 15 at the end of 2020. Most of them withdrew from the alliance after Chinese diplomatic and economic outreach widened in the last two decades.

As the second-largest economy in the world and Asia’s sole superpower, China is happy to use to a growing array of carrots and sticks to erode Taiwan’s diplomatic alliances. The Solomon Islands shifted its recognition in 2019 to China with its prime minister stating that the country prefers a communist China over an "uncertain" Taiwan. Its government expressed interest in joining the Belt and Road Initiative, touted to be the world’s largest infrastructure project spearheaded by China and costing up to US$8 trillion.

The Vatican stretched its systems beyond limits to have the historic pact, which reportedly agrees that the state-controlled church grooms and handpicks new bishop nominees but appoints them only if the Vatican approves. It is something not envisaged in the Church’s canon law.

The two-year pact started ad experimentum was renewed by both parties in October 2020 for another two years. On its part, China gained more international prestige with the renewal.

Reports show many dioceses in China are without bishops and the Vatican wants the election, nomination and appointment of bishops and consolidation of their diocesan territories completed before October 2022, when the experimental period ends.

The Vatican is Taiwan’s only remaining diplomatic partner in Europe, giving it vital access and influence. Despite not being a member of the EU, the Vatican is integrated with the pan-European trade bloc politically and culturally.

Bereft of formal recognition from other nations, Taiwan would be left with little diplomatic ammunition and options to generate external resistance to take on the China narrative that "reunification is an internal matter."

As military options for unification are fraught with danger of global scale, China may explore the possibility of staging a bloodless coup, hoping the Vatican will back it

China views any foreign intervention in Taiwan as interference in its domestic affairs. Unification of Taiwan has remained a priority for China, which has trained and equipped its People’s Liberation Army to act on potential reunification scenarios.

After the recent crackdown in Hong Kong and Beijing’s apparent dislike for the "one country, two systems" framework, the possibility of reunifying Taiwan is increasingly in the pipeline.

The Vatican was tight-lipped when a sweeping security law was imposed in Hong Kong by China in June 2020 by side-stepping Hong Kong’s own legislature. The move was seen as a blow to the "one country, two systems" norm signed between Britain and China while handing over the territory in 1997. Maybe the Vatican-China pact applies to Hong Kong as well.

Among Taiwan’s vital friends, the US, which is required by law to provide Taiwan with the means to defend itself, continues to block Beijing’s decades-old nationalist expansion project. However, the US also follows a policy of "strategic ambiguity" on whether it would come to Taiwan’s rescue in the event of a Chinese takeover.

As military options for unification are fraught with danger of global scale, China may explore the possibility of staging a bloodless coup, hoping the Vatican will back it.

The Vatican has not said anything so far on the increasing tension between Taiwan and China. Does the secret Vatican-China pact apply to Taiwan as well?

CINDY CHIN
I am so disappointed our current Pope Francis. Indeed not only me but also other Hong Kong Catholics, besides Pope compromised our Catholic Cannon Law to mainland China, there's also the rumor the Vatican also involved the Deep State. If we are looking our Holy Father, our faith can be destroyed and caused us turn around converted to be a Protestant. Now, we have to keep our faith within our Catholicism looking up to Our Lord, but deep down it's very sad in apparently our Pope is still trying to lead the Universal Church. For instance, he set up the theme of For a synodal Church: communion, participation and mission, but on the other way, he just pretty admitted such as LGBTQ, Abortion, not a problem.
Reply